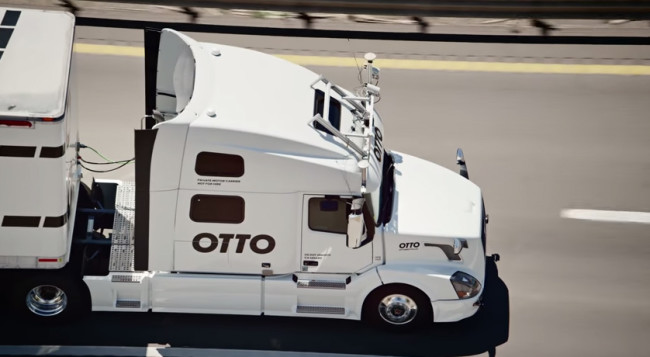 As its first act, a self-driving truck proved it could safely deliver the most precious of cargo: 51,000 cans of Budweiser. Otto, the self-driving vehicle company owned by Uber, on Tuesday announced its prototype had successfully shipped suds from Fort Collins, Colo., to Colorado Springs. To “see” the road, the self-driving system used an array of cameras, radar, lidar and other sensors to follow other vehicles at a safe distance and keep it between the lines. Throughout the 120-mile journey, a professional driver chilled in the sleeper cabin in the back of the truck — you know, just in case. The delivery, however, was more symbolic than anything else — what scientists might call proof-of-concept. The human driver still navigated the vehicle onto Interstate 25 and activated its autonomous drive mode once it had merged into traffic. You see, Otto can only operate autonomously in relatively predictable highway traffic; city streets swarming with a host of random variables — bikers, pedestrians, etc. — are still too much for the system to safely handle.

Once Otto arrived at its exit, the driver once again resumed control to finish the final leg of the beer run. In a blog post, the Otto team shared its vision of the not-so-distant future:

"With an Otto-equipped vehicle, truck drivers will have the opportunity to rest during long stretches of highway while the truck continues to drive and make money for them. When you’ll see a truck driving down the road with nobody in the front seat, you’ll know that it’s highly unlikely to get into a collision, drive aggressively, or waste a single drop of fuel."

Uber is getting serious about redefining the way we move people and things from point A to B. Earlier this year, Volvo Cars and Uber partnered to invest $300 million to develop a fully autonomous, road-ready vehicle by 2021. In September, a test fleet of self-driving Ubers — also with a human driver — hit the pavement in Pittsburgh, Pa. Uber paid roughly $700 million to purchase Otto August, with eyes on tapping into the trucking industry, which generated revenues of about $726 billion dollars within the United States in 2015.