Self-driving Shopping Carts Could Greet You at Walmart 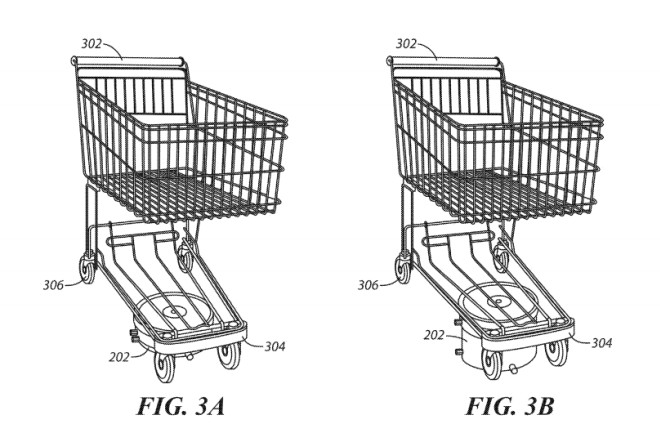 The Roomba-like device, seen under the cart, would slide into position and pull the cart. (Credit: U.S. Patent Office) If it has wheels, there’s a good chance someone, somewhere is going figuring out how to make it roll on its own. Last week, for example, the United States government granted Walmart’s patent request (thank you, Patent Yogi) for a system of self-driving shopping carts. Forget yanking carts from a train of clanking metal, or wheeling the things back to their corrals after your car is loaded. The carts themselves won’t change; instead, a fleet of Roomba-like transport units would slide under carts and ferry them through the store. According to Walmart’s patent request, customers will be able to summon one of these cart-pullers — each equipped with cameras and sensors — with their “user interface device”, perhaps a smartphone app, and a motorized unit will attach to a cart parked in a docking station and pull it to the customer. Once customer and cart meet, the transport unit will serve as a personal store escort. For example, customers could wirelessly beam their shopping list to their cart chauffeur and it’ll guide them through the store item-by-item, according to the request. Can’t find what you’re looking for? Just type it into your “interface device” and follow your cart. The transport units, in theory, will also round up carts adrift in the parking lot and return them to their docking station. Just as a reminder, this is only a patent. It isn’t clear when, or if, the system will be deployed in Walmart stores. However, it does offer a glimpse at the future of shopping — if you still shop in brick-and-mortar stores. Let’s just hope the cart taxi sensors and cameras will be sensitive enough to avoid slamming a cart into the back of your ankle.