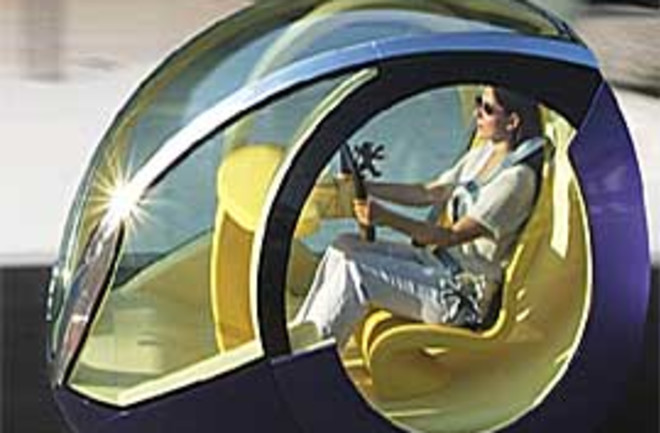 On a recent trip, with my car in cruise control, I noticed something interesting: if the car in front of me slowed down, my car would slow down along with it. Apparently it's equipped with proximity sensors in the front and back, which serve to protect against lazy drivers who hit cruise control and then start reading email on their iPhones while zooming down the highway. (Not me!) Which is great, but I couldn't help but imagine the obvious next step: once you have cruise control and the ability to adjust to the speed of traffic, not to mention cars that park themselves, you are most of the way to self-driving cars. You will be unsurprised to learn that I'm not the first to think of this. Tim Lee has written an interesting introduction to the state of the art, as well as speculations on what the effect of automatic driving would have on urban cityscapes. (Via Yglesias.) A big one: parking is incredibly resource-intensive, but if your car can drive away and wait for you at some central location, vast stretches of land can be returned to human uses rather than automotive uses. Will we have self-driving cars within the next few decades? I don't think it's such a leap, given what technology is already available -- and that technology can be confined to the cars themselves, there is no need to put rails down or any such thing. There is even a sensible phase-in strategy, where we convert present-day carpool lanes into automated-driving lanes. But Atrios is skeptical:

I think self-driving cars are going to be here some time after flying cars, my jetpack, and Glenn Reynolds' sexbots, but this little thought experiment is useful for highlighting that while we talk about highways and roads and whatnot, the biggest problem with cars generally is parking. They take up space. Lots of it. That space reduces density most places, and reduces the benefits of density in places where it exists.

Concerning flying cars and jetpacks, I'm likewise pessimistic (at least sometimes). But those sexbots are on the way. And they'll be arriving in self-driving cars.