Scientists Regrow an Entire Rat Limb in the Lab 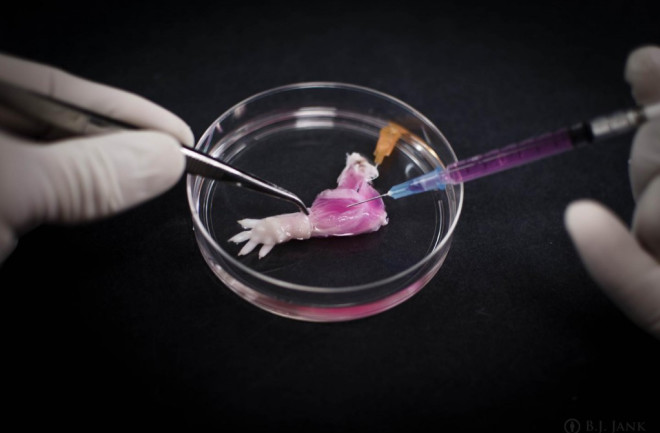 Going Out on a Limb

Scientists didn’t grow the limb from scratch, per se; rather, a donor rat forelimb provided the necessary scaffolding for new cells to take root and multiply. The same technique has been used to regenerate kidneys, livers, ears and lungs in the lab. However, a limb is a bit trickier since it requires a wider variety of cells than these organs. Scientists first used a special detergent to strip away every living cell except the protein-based collagen that gives vessels, tendons and muscles their shape. (Imagine blasting away everything on a house except the wooden frame.)

Scientists' rat limb grows in the bioreactor. (Credit: Bernhard Jank, M.D., Ott Laboratory, Massachusetts General Hospital Center for Regenerative Medicine) Then, researchers inserted muscle and vessel progenitor cells from a different rat. In the future, these cells would be taken from the limb recipient, so that the final product would be biologically compatible with his or her body. To encourage growth, scientists placed the limb in a bioreactor that supplies nutrients, oxygen and electrical stimulation to the developing limb. It took about two to three weeks for it to finish growing, after which it was ready for testing. When scientists stimulated the forelimb with electricity, the paw clenched and unclenched, showing that the muscles were functional. When they attached it to anesthetized rats, blood flowed through the new limb, though it they didn’t test it for movement, New Scientist reports. Researchers published their findings this week in the journal Biomaterials.

Around the world, roughly 70 patients have undergone a hand transplant with favorable outcomes. However, the immune system tends to reject an unfamiliar hand, so these patients need to enroll in life-long immunosuppressive therapy. In the new approach, the big advantage is that the regrown cells are the recipient’s, so the risk of immune rejection is low. The next challenge for scientists is to ensure nerves take root within a bio-artificial limb, which does occur in hand transplants. It isn’t clear if the same will occur in bio-artificial limbs. Scientists say it will be at least a decade before biolimbs are ready for human testing. Still, it’s good news for the more than 1.7 million people in the United States who have lost a limb.