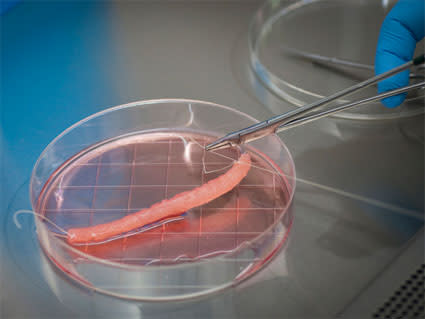 In a society where pill-popping is the answer to many a medical malady, severely dysfunctional or damaged organs are especially frustrating---they're usually beyond the reach of any known drugs. Cell-based therapy, though, is no drug: Using patients' own cells, medical experts have successfully grafted the first engineered-from-scratch urethras. The story starts with five Mexican boys, aged 10 to 14, whose urethras were damaged beyond repair because of accidents.

"When they first came in, they had a leg bag that drains urine, and they have to carry this bag everywhere they go," says Dr. Anthony Atala of Wake Forest University in North Carolina. "It's uncomfortable and painful. So these children were mostly sitting or bed-bound." [NPR]

Currently the usual treatment calls for an artificial graft, which has a failure chance as high as 50% (and failure here means a lifetime of infections and incontinence). "When an organ or tissue is irreparably damaged or traumatically destroyed, no amount of drugs or mechanical devices will restore the patient back to normal," regenerative medicine expert Chris Mason, from University College London, told the BBC.As outlined in their Lancet study, Atala and his colleagues at Wake Forest Institute for Regenerative Medicine didn't use conventional methods to repair these five urethras: They enlisted the help of the patients' own cells to heal them by first harvesting, as Atala told NPR, a patch of cells "less than half the size of a postage stamp" from the boys' bladders. Specifically, they took muscle cells and endothelial cells, which compose the lining of our body's many tubes, including urethras. After isolating the cells they'd need to create the necessary tissues, they then multiplied the cells in culture for several weeks until they had roughly 100 million of them---just enough to get the job done. And using the same material used for dissolvable stitches, they created a tiny drinking-straw-shaped mesh, and carefully added muscle cells to the outside part of the tube and lining cells to the inside part.

Dr Anthony Atala ... described the process as "very much like baking a layer cake". [The Guardian]

The cells were allowed to incubate for another week to ensure they were secured to the mesh, before the experts grafted the tissue-engineered urethra into gaps in their urinary tracks.

Six years on the grafts are still doing well, looking and functioning exactly like a normal urethra in the five boys who are now entering their teens. "It's like they now just have their own urethras," Atala told The Guardian. [The Guardian]

But how can the scientists be so sure of the successful after a mere six years? Part of the answer lies in the fact that the grafts have actually grown as the boys---who are now teenagers---have grown, indicating that their bodies have recognized the grafts (minus the mesh scaffolding, which has since disintegrated) as their own.

"Typically, if you're going to see these structures fail, they can fail early or they can fail late," Atala says. "But if you have them with this long of a follow-up, then you know they're going to do well over time." [NPR]

This urethra engineering is the latest success in cell-based therapies. In 2009, the same team grafted tissue-engineered bladders into nine patients, and other groups have made windpipes from a patient's stem cells, and even a replacement jaw. Even though nobody has grown whole solid organs yet, like livers or kidneys, Atala's team hopes to use this treatment on other tubular structures in the body, like blood vessels, and to start work on over 30 other tissue and organ replacements. In Australia, researchers at Bond University are currently working to grow a functional eye, tissue engineering expert Patrick Warnke told The Guardian. At the moment, though, Atala and his colleagues are celebrating the success of the world's first tissue-engineered urethra. With one out of 150 male babies suffering from urinary birth defects, this procedure could be a valuable new tool in modern medicine. But since this success is only based on a handful of patients, it's going to take quite a few more replications before this becomes commonplace. Related Content: Discoblog: Need a New Pancreas? It May Come From a Sheep Science Not Fiction: We Can Rebuild You: 8 Ways Science Can Fix Your (or Your Cat's) Broken Body 80beats: Making Pig Stem Cells Raises the Possibility of Animal Organ Donors DISCOVER: Tissue Engineering