: This week, scientists say that they've passed a chemistry milestone by creating the world's first practical photosynthesis device. The playing-card-sized photosynthetic gadget uses sunlight to split water molecules into oxygen and hydrogen, which can then be used to produce energy, and is reputedly 10 times more efficient than a natural leaf. Researchers say they expect it to revolutionize power storage, especially in remote areas that don't currently have electricity. "A practical artificial leaf has been one of the Holy Grails of science for decades," says lead researcher Daniel Nocera, who's presenting this research at the National Meeting of the American Chemical Society this week. How the Heck: 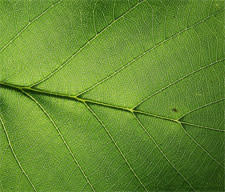