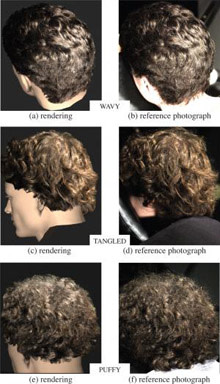 As the paparazzi wait for celebrities to walk by with perfect hair, researchers have found a way to create perfect hair graphically. Scientists at the University of California at San Diego used cameras and light sources in a new way to create ultra-realistic hair on animated figures. The researchers took 2,500 images with 16 cameras, used 150 light sources, and set up three projectors to determine the exact position of each strand of hair and imputed the data into a complex model. Most animated films shown in theaters today typically only show characters with treatment done to the top layer of their hair. The secret to this new model is that it looks at hairstyles from all angles to focus in on individual stands and reproduce the strands from the scalp. The model shows how light reflects off of 100,000 hair strands —an important feature, especially when animators need their characters to look normal when the wind blows and when the sun shines. "We want to give movie and video game makers the tools necessary to animate actors and have their hair look and behave as it would in the real world," says U.C. San Diego computer scientist Matthias Zwicker. The applications of this new hair model could go beyond Hollywood. In Second Life, people can choose to create avatars that look like superheroes. However, polls reveal that most adults prefer to make avatars look like themselves.