Many people think of GPS as a convenient means for getting from one place to another without having to ask strangers for directions. Armed with inexpensive receivers no bigger than cell phones, folks who are directionally challenged can tune in to a constellation of 24 Global Positioning System satellites and find out exactly where they are on the planet at any given moment, not to mention exactly what time it is. What few casual GPS users realize, however, is that these same satellite signals can be used for more than just determining time and location. Techno-savvy scientists have discovered that GPS is a remarkable tool for detecting motion and monitoring a world in flux. 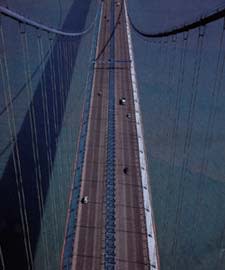 GPS sensors perched atop two 50-story towers on Hong Kong's Tsing Ma Bridge, as well as at strategic points along 100,000 miles of suspension cables, monitor motion caused by high winds in the harbor. The bridge can withstand gusts up to 212 miles per hour.

If a researcher takes readings repeatedly at a fixed location with a GPS receiver, he can track patterns of movement: a volcano's flank bulging as it charges with magma, or an iceberg rotating after breaking off an Antarctic shelf. Add more receivers (additional sensors improve accuracy), reference them to a fixed GPS base station whose position is precisely known (so errors can be factored out of the readings), and suddenly movements as small as one-tenth of an inch come into clear focus and can be monitored in real time. With this new technological capability, scientists are prying into some of the most dynamic processes we know—on land, in the air and sea, and beyond.

A DANCING BRIDGEHong Kong's Tsing Ma Bridge—the world's longest suspension bridge that carries both road and rail traffic—is designed to sway and bend. It can tolerate high typhoon winds that send the 4,518-foot-long bridge swinging several feet from side to side and the passage of trains that can cause the main span to dip by more than two feet. Still, too much movement, say a lateral shift of more than 15 feet, would twist and buckle the bridge's steel girders and cables like Popsicle sticks and string.

To guard against such a catastrophe, engineers overseeing the Tsing Ma have set up a GPS sensor array that continuously determines the exact position of the bridge in three dimensions. Fourteen GPS receivers, connected by miles of fiber-optic wire, are attached to the bridge's cables, decks, and towers. Ten times every second, the sensors relay their position to a computer at a central monitoring facility. Data from two other permanent GPS sensors are also sent to the computer, which then performs corrections to eliminate murky errors. The Tsing Ma's position in space, accurate to within four-tenths of an inch horizontally and less than eight-tenths vertically, is then displayed in real time. The computer also calculates wind speed and wind direction, and estimates stress and load on the bridge's components so engineers can plan for repair and maintenance.

"No other sensors could possibly measure the motion of a long bridge like this," says civil engineer Kai-yuen Wong, head of the GPS bridge-monitoring project for Hong Kong's Highways Department. "GPS makes it possible."

Scientists have never seen a volcanic eruption on Venus. They know there have been eruptions in the distant past but are hard-pressed to determine how fast the lava flowed, how thick it was, or a host of other nitty-gritty details. "It's really difficult to do field-work on Venus," jokes Andrew Johnston, a geographer at the Smithsonian Institution's National Air and Space Museum. "So we find things that look similar on Earth and measure them. Then we can correlate what's on the ground with what is in the satellite images—and apply that back to the remote images of other planets." 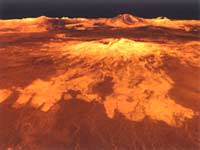 Viewed from the Magellan space probe, the Venusian volcano Sapa Mons casts an eerie glow. Researchers hope to discover how the volcano formed by comparing its lava flows with GPS readings of lava flows on Earth.

Looking through satellite images, Johnston and his colleagues spotted two lava flows in New Mexico that extend for 25 to 30 miles: the Carrizozo, in and near the White Sands Missile Range west of Alamogordo, and the McCartys flows, south of Grants. Such long flows aren't often seen on Earth, but they're typical of Venusian flows. "Venus is much hotter and tends to keep lava liquid for a longer time," Johnston says.

Johnston and a colleague, geologist James Zimbelman, subsequently took thousands of GPS readings of the Carrizozo and McCartys flows, creating precise topographical profiles of the lava flows at many different points. "With data about height and steepness, you learn about the viscosity of the lava, which then starts to tell you about what the lava was made of and how fast it moved when it came out," says Johnston. The lava at Carrizozo and McCartys was of very low viscosity in the center of the flows, where it moved fast and furiously. On the other hand, toward the margins of the flows, the lava was more viscous and crept slowly along as it cooled. The GPS data hint at other features buried within the frozen forms, including lava tubes down the center of the flows, which allowed hot rock to stay molten 10 miles or more from its source. Johnston doesn't know if similar tubes were ever present on Venus, but it's an interesting possibility. Before high-precision surveying with GPS, Johnston says, "you just didn't do this kind of work. The only way to know anything about a flow was to see it come out."

SEA-CHANGE DETECTORFar out at sea, large whirlpools up to 100 miles wide imperceptibly churn ocean waters, bringing food and nutrients from the depths up to the surface and sinking debris to the cold, dark waters below. Oceanographers believe the eddies play an important role in the cycling of carbon from land to sea and back again, but little else is known because no one has ever been able to get a good look at them.

Research satellites like the Topex/Poseidon altimeter, a joint venture of NASA and France's space agency, are capable of measuring the water-height fluctuations that characterize eddies. Within about 12 miles of shore, however, the influence of the land muddles Topex's data. "The other problem is that Topex comes back over a given spot every 10 days, and an eddy could be here and gone in that time," says Robert Treuhaft of NASA's Jet Propulsion Laboratory at the California Institute of Technology in Pasadena. Neither is an issue with GPS, which can home in on the ocean without land data getting in the way and covers all the globe, all the time.

To see how effective GPS might be at monitoring water-height fluctuations, Treuhaft and his colleagues recently conducted some trial runs at Crater Lake in Oregon. They placed a GPS receiver on a high, craggy perch at Cloudcap Overlook, 1,570 feet above the lake. The steep 44-degree angle from the outcrop to the lake's mirrorlike surface provided a wide range of elevation angles for GPS readings. The sensor captured GPS signals scattered off the lake, and then, by comparing their travel time with that of signals that took a direct path to the receiver, the researchers were able to compute water height within less than an inch of error. Preliminary experiments at the Harvest oil platform off the central California coast also look promising.

GPS might be able to reveal more than the secret life of ocean eddies. Treuhaft says it could be used to monitor changes in sea level due to global warming. Scientists rely on tide gauges, which can account only for changes close to shore. "Within two or three years, you might be able to plant receivers on mountaintops or buildings and continuously and cheaply—because the satellites are already there—measure sea-level changes 20 kilometers out," says Treuhaft. "It could be quite a bonanza."

Seismologists traditionally use seismometers, tiltmeters, and strainometers to detect the slight shudders and heavings of the earth to provide early warning of an earthquake. But those instruments sense only rapid and fairly substantial movements—over the course of minutes or seconds—not the slow creakings that could presage a quake weeks or months in advance. Japan's Geographical Survey Institute can now gather that kind of long-term data with Geonet, a grid of more than 1,000 GPS sensors covering the countryside. The sensors are located an average of 15 miles apart but are closer together in seismically precarious regions. Each GPS receiver is housed within a 15-foot-tall stainless-steel pillar, along with an antenna that picks up satellite signals once every 30 seconds. Data from each sensor can be calculated to within less than one-tenth of an inch horizontally, allowing Geonet to monitor otherwise imperceptible motions. 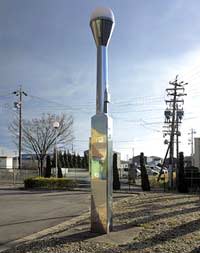 A GPS receiver set above a fault line near the Japanese city of Nagoya (pop. 2 million) is part of a nationwide system of sensors that provide real-time data on crustal movement that could cause a deadly earthquake.

Recently, Geonet detected signs of some unusual activity near Nagoya, Japan's fourth-most-populated city, which is on top of the tectonic trough where the Philippine oceanic plate plunges beneath the Eurasian plate. The ground in Nagoya usually shifts to the west about an inch a year. Beginning in January 2001, however, the earth gradually began moving at about the same rate in the opposite direction. If such a shift occurred instantly, a very large earthquake would rattle the region. "This is a very interesting and potentially dangerous signal," says geodesist Makoto Murakami. "We don't know what will happen next, but if we hadn't had the GPS network in place, we would never have known this was going on."

For a good GPS overview: www.colorado.edu/geography/gcraft/notes/gps/gps.html.