Salt Lovers, This Fork Is for You 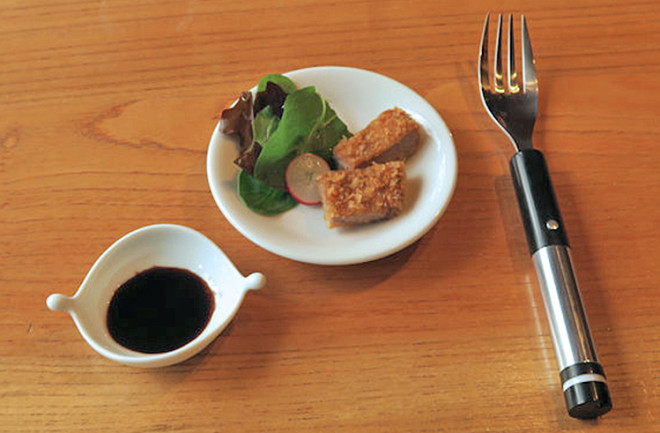 The "electric flavoring fork" alongside a sodium-free dish. (Credit: Nikkei Technology) Good news for sodium aficionados everywhere: The next time you feel like reaching for the salt shaker, you could just pick up your fork instead. A prototype from the Rekimoto Lab at the University of Tokyo simulates the flavor of salt with an electric current, imbuing food with all of the flavorful goodness without increasing your blood pressure.

No Salt? No Problem?

The fork's electrical jolt is activated with the touch of a button, completing a circuit between your fingers, the metal fork handle and your tongue. When charged sodium ions hit our tongue, their electrical potential activates ion gates that relay messages to our brains. The fork hijacks this system by targeting these ion gates with an electric charge, fooling them into sending a salty signal to our brains.

(Credit: Nikkei Technology) The researchers had demonstrated this technology as far back as 2012, but have now packaged it into a cheap and consumer-friendly device. Their so-called "electric-flavoring" technology is aimed at ensuring people with low-salt diets, such as those suffering from hypertension, don't miss out on the many salty pleasures modern cuisine has to offer. In addition, the ability to alter the level of current, thus changing the level of saltiness, could allow diners to individually tune their meals to their preferences. The materials to make the fork cost as little as $18, fork not included. The researchers say that their design can also simulate sour flavors, based on the same mechanism. However, they warn that too much current results in an unpleasant metallic taste. Generating sweet and savory tastes has proven to be more difficult — the researchers have yet to figure out how to make your lemonade sweeter, or your steak tastier.