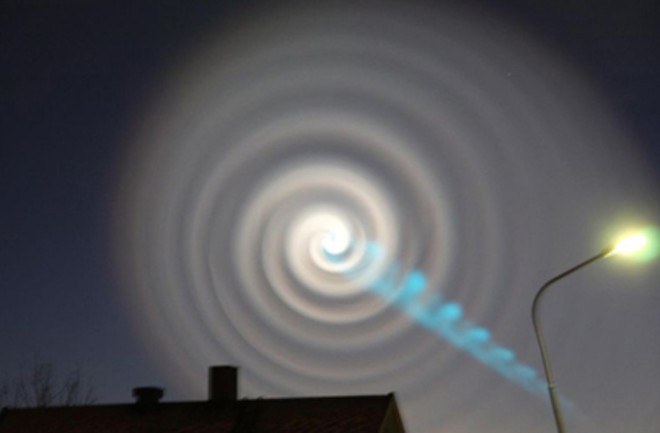 As DISCOVER's Bad Astronomer reported, Norwegians spotted some seriously strange lights in the night sky early yesterday morning. Since it appeared to be a real phenomenon (as opposed to a Photoshopped delight) and as there was no indication that the little green men had finally come, astronomers and aviation experts immediately began investigating what could have caused such a light show. The Bad Astronomer suggested that it looked like a rocket spinning out of control, and a day later he was proven right. It turns out the bizarre fireworks display was caused by a missile test that originated in Russia, however the heralded Bulava missile turned out to be a dud--again.

The submarine-based Bulava (Mace) missile has been billed as Russia's newest technological breakthrough to support its nuclear deterrent, but the repeated test failures are an embarrassment for the Kremlin [Reuters].

According to Russian newspapers, it was the eighth failed test for the intercontinental missile, which is intended to carry multiple nuclear warheads. Sources within Russia's defense ministry later owned up to the failure, saying the launch was made by a nuclear submarine positioned in the White Sea. There was a technical malfunction during the third stage of the missile's trajectory that caused it to spin out of control, according to a defense ministry spokesperson.

Although some people may have been disappointed to realize that a UFO loaded with aliens was not descending upon Norway (perhaps to congratulate President Obama for his Nobel Peace prize), the light show was nonetheless spectacular. Several videos on YouTube show what some say looks like a spiral galaxy. Experts are saying that

rockets often start spiraling on their own during partial engine failure. And the fact that the first two stages worked as the powerful missile hurtled skyward meant it should have been high in the atmosphere before the problem occurred, leaving a spiral of exhaust that would have been illuminated by the lights of Norway before the missile exploded [Christian Science Monitor]. Despite the multiple failures of the Bulava missiles Russia doesn't plan to scrap the program anytime soon; it has invested a significant amount of money into the program, which was supposed to replace the old Soviet-era nuclear missiles.