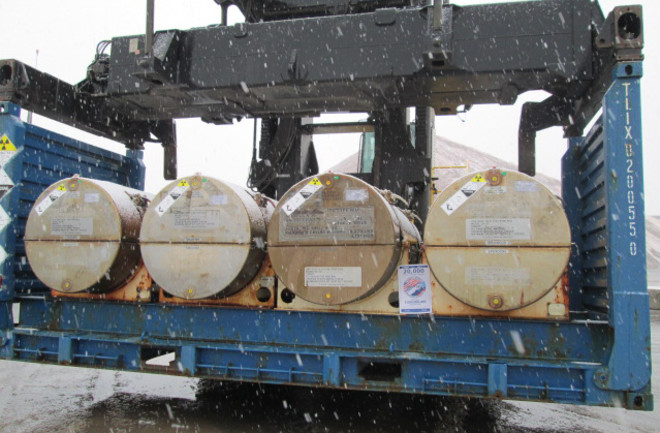 Off-loading the final shipment of Russia's low enriched uranium (LEU) at the Port of Baltimore. Credit: U.S. National Nuclear Security Administration/flickr For the last two decades, the United States has been drawing about a tenth of its electrical power from an unlikely source: the uranium from 20,000 decommissioned Russian nuclear bombs. But today marks the end of this energy exchange era. The arrangement with a former adversary may seem strange, especially since these are the very bombs that Americans once feared would be used against them. But on a practical level, the program, called Megatons to Megawatts, actually makes a lot of sense.

When the Cold War ended, the Russian and U.S. governments struck a deal: Russia would turn the uranium from its decommissioned warheads into nuclear fuel. The U.S. would buy this fuel and sell it to commercial nuclear power plants back home. The exchange was a way for the former Soviet Union to clean up its military facilities and get paid to do it. Anton Khlopkov, the director of Russia's Center for Energy and Security Studies told NPR, "This is the only time in history when disarmament was actually profitable."

From Bombs to Light Bulbs

Since the deal was struck in 1993, 500 metric tons of low-enriched uranium have made their way to the U.S. That's been enough fuel to provide about a tenth of the United States' electricity consumption over the years. In fact, U.S. Energy Secretary Ernest Moniz said in a statement today, nearly every commercial nuclear reactor in the United States has received nuclear fuel under the program. Today the very last shipment of this repurposed uranium arrived at a port in Baltimore. It will be converted into fuel rods and shipped out to nuclear power plants across the country over the next few years. According to the Verge, "Matthew Bunn, professor at Harvard University, called the deal one of the greatest diplomatic achievements ever."

Fingers crossed that future diplomacy can be so win-win.