Assembling a tanker ship is appallingly inhumane work: Huge steel blocks must be joined together in an intricate layout that forces welders to spend long hours in cramped, fume-laden spaces. So roboticist Pablo González de Santos and his colleagues at the Industrial Automation Institute of the Spanish Council for Scientific Research are delegating the job to ROWER, a 4-foot-long mobile platform that incorporates a commercial robotic welding arm.

ROWER operates inside the ribbed, double-walled hull that forms the bottom of a tanker. The robot's four pistonlike feet extend and press against the ribs on the floor and the ceiling, keeping it in place while it welds a watertight seam between adjoining blocks. To move forward, the device retracts one foot at a time, takes a step onto the next set of ribs, and extends its pistons to regain secure footing. When it finishes welding one ship block, ROWER has to be disassembled, moved, and put back together inside the next one, because the only passageway between blocks is a small manhole. But the process takes only about an hour, "and the robot does not need to stop as frequently as human operators," González de Santos says. A recent demonstration in Italy proved ROWER can speed up shipbuilding; now its creators are trying to commercialize the system. 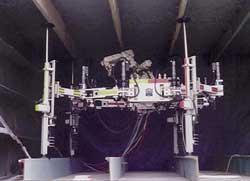