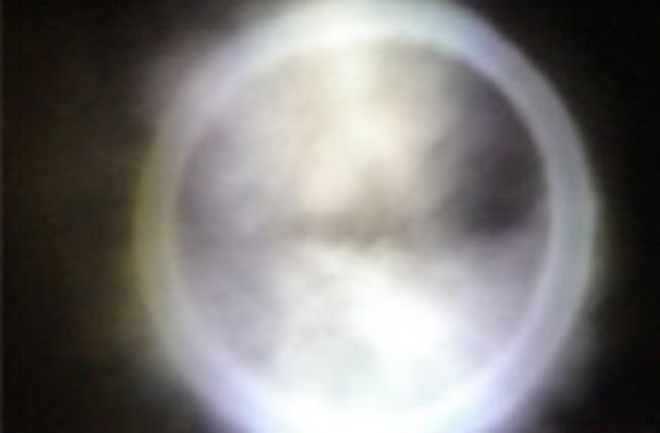 Ant trails, airborne chemicals, wood vibrations---scientists have a long history of borrowing clever communication techniques from the animal kingdom. Inspired by the odd social habits of a cave-dwelling cricket, scientists have now taught robots to communicate by firing rings of pressurized air at each other. The cricket in question is the African cave cricket (Phaeophilacris spectrum), which rapidly flicks its wings to launch donut-shaped air rings, a type of vortex, to both potential mates and enemies. Reduced to two kinds of messages, its "language" is pretty simple: It sends isolated vortices to threaten its rival, and a rapid sequence of vortices to woo would-be lovers. When Andy Russell, an engineer at Monash University in Australia, learned about the cricket, he thought this technique would improve robots' ability to communicate in noisy environments---but that wasn't the only benefit. "Like the cave crickets, there may be times when a robot does not want its communications intercepted," Russell told New Scientist. Researchers speculate that the cricket uses vortices to communicate undetected by predators---so why not robots? Chris Melhuish, a researcher at the Bristol Robotics Laboratory in the UK said, "This could be a useful addition to the communication armoury of future robotic systems." The science of vortices reaches back to 1858, when William Rogers first described vortex rings, and scientists have been dazzled ever since by how far these rings can travel. They form when a slug of air or liquid is shot out of a small nozzle into a region of still air or liquid: As the slug travels out of the nozzle, the low-pressure build-up on the outside of the slug causes the edge to curl, eventually forming a donut shape that can then propagate quite a distance. (Dolphins are natural masters of the art; humans aren't bad ourselves, and we can use toys to make big rings.) Russell co-opted cricket communications with the science of vortices by equipping a squat, roughly 6-inch tall, cylinder-shaped robot with eight air disturbance sensors, sending binary messages via a separate vortex generator, which isn't quite as high-tech as it sounds: it's pretty much like a loudspeaker cone, sending pulses of air outward through a less than one-inch aperture. Because it's difficult to track an pulse of air---it is invisible, after all---the engineers burned incense to see the air disturbances in progress. By themselves, these air pulses don't say much---but when sent in a series of binary coded pulses, they can be used to communicate with other robots. In this study, for example, the scientists sent a sequence of 1,000 vortices to relay the binary coded word for "vortex" over a distance of nearly 12 inches. In addition to sending messages through varied pulses, the sensors could detect both the direction and range of the sender: The message direction was gathered by sensing which of the eight sensors were triggered, while the robot calculated distance by analyzing the lag between the fast- and slow-moving vortices. Sensing air disturbances is all fine and dandy, but what happens when you're in a breezy environment? The scientists equipped the robot with a plastic film attached at only one end to take care of that: When hooked up to an optical sensor, the robot can detect the difference between laminar (typical of breezes) and turbulent flow (typical of the vortices). But despite their valiant efforts, the common error was still missed vortices: As the rings of air traveled, breezes from the room's ventilation system would sometimes trigger a phantom vortex, sending unintentional messages. While not perfect, the scientists nevertheless demonstrated that such robot-to-robot communication is possible. In addition to fixing the errors, the researchers want to construct a smaller vortex generator---one closer to the size of its inspiration, the wing-flick of the cave cricket. Related Content: DISCOVER: When Robots Live Among Us Discoblog: How to Speak a Language That Your Robot Will Understand Discoblog: Japan Wants to Send a Tweeting Companion-Bot to the Space Station DISCOVER: Evolving A Conscious Machine Image: Wikimedia Commons / Traitor