The key to building a more energy-efficient robot? Avian-inspired legs. 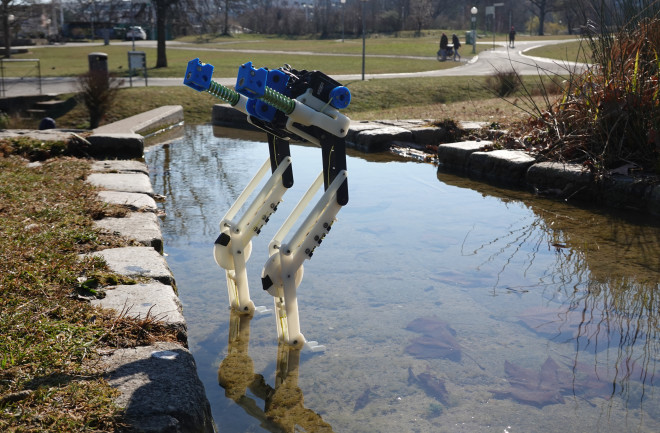 The key to creating the next generation of robots may not lie in cutting-edge algorithms, materials or motors, but in the mechanics of large, flightless birds.

Alexander Badri-Spröwitz and colleagues at the Max Planck Institute for Intelligent Systems in Germany have developed a more efficient system that enables robots to walk by mimicking the series of tendons and muscles in the legs of an emu.

By using a mechanical clutch system, the “Birdbot” requires fewer motors and expends a quarter of the energy of leading existing models, the researchers say. The bird-like mechanics could enable robots to walk faster and for longer, while the technology could be scaled up to carry several metric tons.

As with electric vehicles, one of the limits on the use of robots currently is battery capacity. For them to become more useful, they need an energy system that allows them to operate for long, uninterrupted periods.

“It's a bit like an airplane,” Badri-Spröwitz says. “As legged robots carry their own power supply, you need to maximize loading capacity and reduce energy consumption.”

Improvements in battery density should eventually allow robots to run for longer without recharging. Incorporating solar panels could make it possible for robots to operate 24/7 — but they will need to walk more efficiently to prevent them from burning through the battery’s power supply quicker than it can recharge. The current models consume significant amounts of energy — particularly to lift up the legs before a stride.

Since 2008, Badri-Spröwitz has been looking to nature for a way to make the motion more economical. He may have found the answer while examining a dead, flightless bird.

“I looked at the emu cadaver and realized that when I moved one joint in the leg, all the other joints were moving along with it,” he says. The engineer saw it was not nerve control, but pure mechanics driving the sequence of motions.

Existing legged robots use motors to carry their body weight, producing torque to lift up the robot and to keep it upright. A lot of energy is lost in bending the leg so it can then swing forward. “It sounds trivial, but if you didn’t bend your leg every time it would run into the ground,”  Badri-Spröwitz says. In legged robot prototypes, a sensor is used to detect when a foot hits the ground in order to activate the motors and power a sequence of movements in the legs. This uses energy and limits speed due to the time needed to process impact and activate the next step.

In ostriches — which weigh more than 200 pounds and speed through the savanna on their gangly legs at speeds of up to 30 mph — this is not an issue. Their foot acts as a switch that automatically triggers the motions that power it forward — a process replicated in the Birdbot.

“The whole thing is a big network that acts like muscles and tendons,” Badri-Spröwitz says. “It begins with muscles, comes to tendon and then ends with the foot. The foot is used as a switch, turning the muscle-tendon network on and off, switching off the spring in the swing phase, when the foot swings backwards.”

Badri-Spröwitz’s colleague Monica Daley realized the use of the mechanical sequence when experimenting with guinea fowl. Daley camouflaged potholes in the path of running guinea fowl to see how it impeded their running. Nerve signals are transmitted at around 100 feet per second, so by the time the birds realized there was a hole, they should have fallen. But they kept on running, suggesting they were not relying on nerve signals to pass from the foot to the brain via the spinal cord, but a mechanical reflex.

As large birds such as ostriches pull their legs up towards their bodies, their feet rotate almost 180 degrees backwards, acting as a switch in a mechanically coupled network of muscles and tendons that extends across multiple joints.

Previously, robot motors were switched on and off depending on where in the stride the robot is. Just as the foot eliminates the need for the nervous system to kick in in emus, in robots it removes the need for a complex series of sensors and motors. Instead it uses a built-in reflex: When the foot hits the ground, the leg springs back.

The Birdbot uses two motors to pull on tendons: the hip motor to drive the leg forward and backward, while the knee motor swings the knee joint forward. Power is stored in the leg during compression and released when each foot strikes the floor, sending the robot forward.

Another advantage of  the Birdbot is that it is more efficient at rest. Its elastic spring system means it can stand indefinitely without consuming energy, much like flightless birds that can sleep standing up and unlike humans, who tire when squatting with the knee flexed. The Birdbot can also walk on flat surfaces at different heights, meaning that it could climb stairs, though it currently requires a harness for balance. Badri-Spröwitz’s team is working on systems that would allow it to turn sideways and navigate uneven surfaces. The current model weighs only 3.7 pounds, but its mechanics allow it to be scaled up massively for myriad purposes, its developers say.

“We could now build legged robots, which become much much larger and eliminate this problem that we had before, which always limits either one phase of movement or the other, because you need to put a lot of power in there. Our system doesn't need to do that anymore and can therefore be pretty much any size,” Badri-Spröwitz says.