"Just a second, I'll catch a robot," says Roland Siegwart. He scoops one up to demonstrate just how small something so capable can be. "It's two by one-and-a-half centimeters [roughly three fourths of an inch square], the size of a sugar cube." Siegwart, Gilles Caprari, and their colleagues at the Swiss Federal Institute of Technology in Lausanne built a fleet of mini-bots, all named Alice, to show that such machines could be cheap yet capable of fulfilling interesting tasks. Powered by a watch motor and battery, each of the Alices has four infrared sensors, so they can follow a wall through a maze and avoid obstacles. When two robots approach each other, they can transmit numerical identities; the senior one takes the lead and the other falls in behind it. The micro-robots can also radio their movements to a base computer, thereby building up a map of the territory they have covered— useful for exploring alien landscapes or buildings toppled by an earthquake. Siegwart even lets interested outsiders take control of an Alice over the Internet at his Web site: robOnWeb.epfl.ch/guide.html. 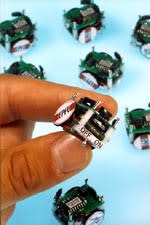