You've probably watched postal workers and wondered if they could move just a little faster. The United States Postal Service feels the same way. Over the past couple years, 58 of the nation's largest postal processing and distribution centers have started replacing manual mail sorters with high-speed robots. The machines come in two varieties: floor-standing robots mounted on a central pedestal and more versatile gantry robots that run along overhead tracks. Both are based on commercial assembly-line robots, modified to do tasks like lifting 300-pound loads of bulk mail and reading the post office's unique sorting instructions. "Let's say the mail comes into Chicago from the airlines," says John C. Weller, program manager of material-handling research and analysis for the Postal Service. "Each tray of mail has a bar-code label, which a scanner reads and transmits to the robot. It looks up that bar code and takes the tray to the matching station. It then loads containers to go to the different Chicago plants." The robots should help cut labor expenditures, which currently account for 80 percent of operating costs. No word on when dog-proof machines will replace the pooch-fearing mail carrier. 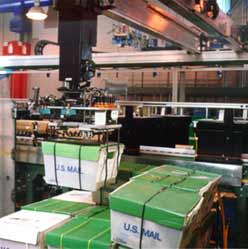