A single living cell cannot do much, but a bunch of them linked together can become a swimming shark, a running gazelle, or a flying falcon. Daniela Rus of Dartmouth College and her former student Marsette Vona, now at MIT, are building modular robots that mirror that kind of flexibility. Each module consists of a cube-shaped unit, called an atom, equipped with its own battery and sensors. The atoms can expand from two to four inches wide and can attach to one another. When the atoms lock together, the robot can scoot along like an inchworm or rearrange its atoms into another shape better suited to the task at hand, whether it involves movement, grasping, or sensing.

Rus hopes to eventually build robots from thousands of miniaturized atoms made out of microelectromechanical devices, each hardly bigger than the biological cells it mimics. These future versions could be used to survey remote or uninhabitable landscapes or to create self-assembling structures in space. They could form endlessly readjustable conveyor belts in factories or computerized "modeling clay" to display architects' computer renderings of possible new buildings. They might even apply their protean ways to tend to your comfort. "The robots could create smart furniture that would be the ultimate customization for the home," Rus says. 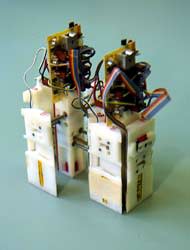