Takanori Shibata's robotic cat is a rather poor imitation of the real thing in one regard: It actually responds to its owner. "When it hears its name, it looks in the direction of the sound and blinks its eyes to make eye contact," he says. Shibata, a mechanical engineer at the Japanese Ministry of International Trade and Industry, also designed his mechanical feline to stretch, curl up to sleep, and purr when petted. If the robot is ignored, it will look around and make beckoning motions or meows to get attention. Force sensors tell the robot if its owner is petting it gently or hitting it. Adaptive software allows the robo-kitty to change its behaviors depending on how it is treated— repeating the actions that prompted affectionate stroking, for instance— which helps build an emotional bond between human and machine. All of these fancy behaviors are not just for fun; they are part of ongoing research exploring how machines can be more useful to people in social settings. Omron Corporation plans to start selling the cat robot in Japan within a year. 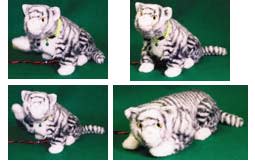