Robot See, Robot Do? “Jules” Makes Faces Back at You 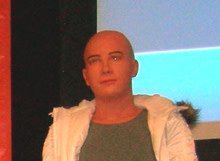 Scientists have managed to create quite possibly the most annoying robot ever.“Jules,” a disembodied robot head with a statistically perfect androgynous face, can instantly mimic the facial expressions of humans it sees through its video camera eyes.You smile, Jules smiles, you stare in surprise, Jules stares back in surprise, you scrunch up your nose in disgust, Jules…you get the idea.

Researchers at Hanson Robotics engineered Jules’s face with 34 internal motors masked by a skin-like rubber known as Frubber.Jules is programmed to understand ten different human emotions, including happiness, sadness, and concern, and to mirror these emotions with its intricate set of motor “muscles.”Jules also speaks in a male voice with a British accent, and can simulate verbal interactions complete with eye contact.

The researchers believe empathetic humanoid robots are the next step in robot-human interactions.They say future versions of Jules could be used as companions (or therapists) for astronauts on solo missions or the elderly in nursing homes.But others think robots that look and act “too human” would just confuse little kids, seriously freak out the elderly, and inspire misguided marriage proposals.The researchers sure aren’t helping their case with this eerie video of Jules talking about “destroying humanity.”