Robot Designed to Run Like a Lizard Over Sand 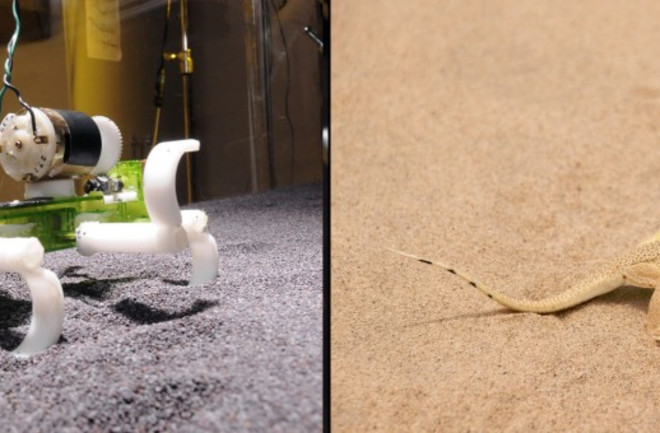 Roboticists have successfully colonized air, water and land with their mechanical critters. There are aerial research drones, underwater robotic gliders, robots that can roll and climb stairs. But one consistent challenge for existing robots is walking on shifting surfaces such as sand. A robot design published today is a good contender for solving that problem.

As is often the case in modern robotics, the scientists' inspiration came from nature. Many small animals navigate sand, gravel, rubble, snow and leaf litter every day. However the mechanics of interactions with such "flowable ground" have been even more challenging for researchers to mathematically model than movement through fluids.

Modeling that interaction is a crucial first step of building a sand-walking robot. The engineers began their research by looking at previous studies on the way various kinds of desert lizards walk, as well as data on existing similar robots such as RHex.

Computer simulations allowed them to identify the optimal leg shapes and stride frequencies for traversing such deformable terrain. A C-shaped leg was mathematically most efficient. They then mechanically tested the leg, measuring the lift and drag as it rotated through sand (or sometimes flat beds of glass beads or poppy seeds).

What they came up with is a six-legged robot that is able to move efficiently across a bed of dry, loose sand. Its maximum speed was a little over 2 feet per second, with each leg making 5 cycles in that amount of time, they report today in Science.

That's still not as efficient as the locomotion of walking animals. However it's a step in the right direction to improve the gait of roving and walking robots, such as the Mars rovers.