Rise of the (Friendly) Drones

Unmanned aerial vehicles like the Predator have been a hit for the military. Just wait  until ordinary folks get their hands on them. 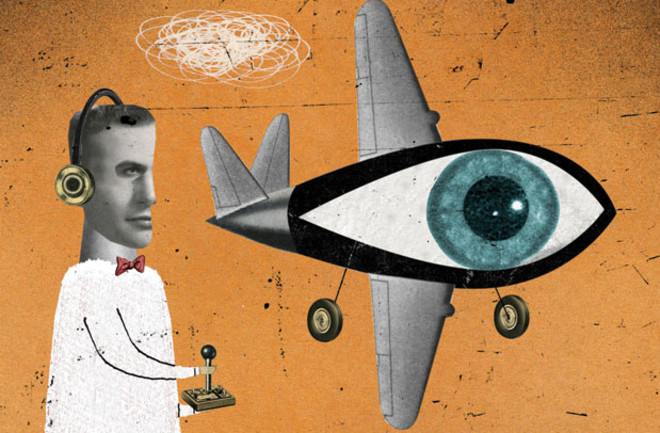 The Predator unmanned aerial vehicle, or UAV, has proven a formidable weapon for the U.S. military, quietly lurking in the sky and then zipping in to loose a missile on enemy targets. Its effectiveness raises an important question: When will I have a robotic plane of my own buzzing about that I might summon down to teach a lesson to some of the many deeply annoying people who cross my path? A mild Taser zap or even just a spitball would be fine.

I’m very likely out of luck on this score, due to the bizarre fact that neither Taser zaps nor spitballs share the constitutional protection afforded bullets. So I’ll just have to find other ways to make use of the tiny airborne drone that will almost certainly be at my beck and call in the not-too-distant future.

In fact, I’m tempted to head over to a Brookstone right now and pick up a Parrot AR.Drone Quadricopter—a $300, four-rotored, self-stabilizing microaircraft with two video cameras that I can send 150 feet up and down my street to hover outside homes and put my neighbors on notice that their transgressions will no longer go unrecorded. That could keep me occupied until I can afford the more sophisticated $10,000 swinglet cam by senseFly, which can fly 10 miles, or the $20,000 Draganflyer X4-P, which can carry a 1.5-pound payload—usually a high-end camera—for about 15 minutes.

With a winged camera to beam images to me, I’d also be able to effortlessly inspect my gutters, track my occasionally escaped dog, gauge the lines at the drive-through window, or scope out a dark parking lot before making my way to my car.

But I’ll probably hold out on buying a microdrone, because even the Draganflyer is a mere toy compared with what dozens of engineering teams at universities and companies around the world are hard at work on: miniature, autonomous, inexpensive aircraft that you or I could send flying miles to perform any of a wide range of tasks.

I, for one, can’t see what could possibly be wrong with providing personal air-force capabilities to the masses. But if we’re going to get truly interesting things done with our drones, we’ll need them to fly farther, higher, and longer, as well as to carry more, and do it with much more sophisticated control. All that’s in the works, according to Mary “Missy” Cummings, a former F/A-18 fighter pilot who is an MIT aeronautics professor focusing on human interfaces for UAVs. “This is the best thing to happen to aviation since the space race,” she says. “We’re talking about a technology with a low cost of entry that anyone with a cell phone can use.”

The new field is engaging students around the world, Cummings adds, and is engendering some creative ideas. At the top of her wish list: a personal drone to shadow her 3-year-old daughter when she’s old enough to walk to school. A hobbyist has reportedly used a drone to track cattle (apparently taking up the slack left by the EPA, which contrary to widespread reports, is not sending drones to spy on farms throughout the Midwest). And one group of students, Cummings says, is drawing up plans for a drone-based taco delivery service.

Affordable microdrones could give ordinary citizens and small businesses access to the kinds of tools that are currently available only to government agencies, well-funded scientists, and big corporations. “If there’s an earthquake, we could readily adapt our UAVs to serve as flying cellular towers to restore communications and help look for survivors,” says Lora Weiss, a Georgia Tech researcher who heads up a robotics and unmanned systems lab. How many times have I been stuck in camping sites, rural towns, or Houston wishing I had that sort of basic trapping of civilization? My drone could provide it, relaying the Wi-Fi signal from whichever Global Data Communications Node (otherwise known as Starbucks) is invariably sitting nearby, just out of my line of sight.

Next Page: Fast, Cheap, and in Control

Name your geeky hobby or passion—weather sensing, wildlife spying, environmental monitoring, terrain mapping—and it’s being done right now with a refrigerator-size, multi-tens-of-thousands-of-dollars drone, and will be doable soon with a shoebox-size, multi-hundred-dollar version.

Unfortunately, personal drones have a ways to go. For example, the Draganflyer is, in technical terms, a mere four-taco-delivery drone. That’s plenty of food for me, to be sure, but what are the rest of my family and my dinner guests supposed to eat? The limits on payload weight seriously cramp the prospects of a drone-based delivery industry that could go well beyond tacos—perhaps all the way to fully loaded burritos from that taqueria you loved in college, even though it’s 75 miles away.

Standing in the way of this dream is basic physics, which cruelly demands that every ounce of extra weight added to a microdrone be accompanied by a big jump in available power. Sticking on a bigger engine is easy, but that means bigger batteries, bigger fuel tanks, or shorter flight times. Fixed-wing (airplane-style) drones like the Predator can carry much more weight for their size than rotary-wing (helicopter-style) drones, but can’t hover to get a good close-up look at objects of interest, nor could they easily hand off a taco, and they need a runwaylike surface to land.

To keep personal drones in the air longer, higher, and farther, researchers are exploring ways to recharge batteries in flight. “We’re going to be able to deliver power to drones wirelessly,” says Kurt Barnhart, who heads the Aviation Department at Kansas State University. “We’re trying to do it with radio waves here, though others have done it with lasers.” Another approach under study, he adds, is “power harvesting”—having drones perch themselves on power lines when they need a boost. Eventually solar power cells may become light and efficient enough to keep drones up indefinitely, at least during the day. I have no problem shifting my taco consumption to lunchtime.

Fast, Cheap, and in Control

If microdrones are to be truly handy, they will also have to be controllable well beyond the one-mile limit of the radio-frequency signals that aircraft like the Draganflyer currently employ. The solution, as it is to so many problems in contemporary life, is smartphones. Cummings and her team have already developed a microdrone prototype that has flown in Boston under the control of a phone-equipped armchair pilot in Seattle. As long as the drone has a cell signal, a Wi-Fi connection, and juice in the batteries, it could stay on mission.

Perhaps even better, personal UAVs need not be under any direct control whatsoever. Incorporating cheap GPS chips and autopilot software cribbed from real aircraft, microdrones are moving toward autonomous flight, allowing you to simply pick a path from a map loaded on your computer or smartphone and then turn the drone loose to fly it. SenseFly’s swinglet cam already allows that sort of pilot- and signal-free operation, which is part of the reason why it can cover more than 10 miles in a single flight.

Before we fill the skies with swarms of autonomously flying cameras, atmospheric sensors, and Mexican food, we need to figure out how to keep them from crashing into one another, not to mention heading into passenger planes. The Federal Aviation Administration currently addresses the problem by prohibiting drones from airspace around populated areas, which is of course where you’d most want to fly them. But the agency plans to allow drones, civilian or otherwise, to share airspace with old-fashioned piloted aircraft by 2015—provided the drones incorporate collision-avoidance technology.

That was the biggest challenge facing drones right now, Barnhart says. “Getting a drone to make an intelligent assessment of the situation and maneuver to avoid any hazards without being told what to do is an enormously complex problem,” he explains. But his group and other researchers are well along in developing highly sophisticated software that is up to the task. In fact, he says, the main stumbling block now isn’t that drones can’t avoid other aircraft, it’s that they can’t anticipate what goofy, unpredictable action the human pilot of an old-school aircraft might take upon spotting a carne asada taco coming in hot at 11 o’clock high. “We just have to make sure that a drone taking evasive action doesn’t end up creating a bigger problem,” Barnhart says.

Autonomy has another upside: A personal drone smart enough to avoid other aircraft would be able to seek out and link up with others of its kind. “We’re looking at how to have a collection of small, cheap, lightweight, unmanned aircraft coordinate with each other,” Weiss says. Why wait for the EPA to send up a $200,000 UAV to spy on your vast ranch, when you and your pals could have your $500 drones split up the chore? Different drones could cover different areas, or carry different sensors. Cummings notes that future microdrones may even be able to self-assemble in the air, perhaps to form a collective aircraft that can cruise long distances more efficiently, so you can monitor a fracking operation a few counties over (or just be really picky about where you get your lunch).

I’m also thinking about coordinated spitball strikes. If only constitutional barriers were as easily overcome as technological ones.

David H. Freedman is a freelance journalist, author, and longtime contributor to DISCOVER. You can follow him on Twitter at dhfreedman