Riding on a Beam of Light

Sailships may offer our best shot at reaching the edge of the solar system and beyond. 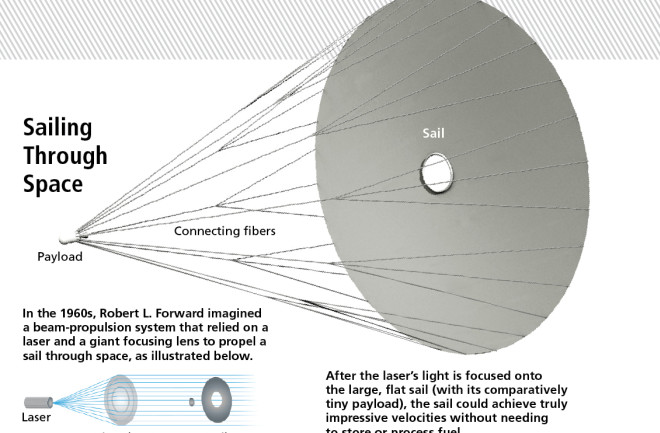 As teenage brothers and identical twins growing up in 1950s Alabama, Gregory and James Benford both read Time for the Stars, Robert Heinlein’s 1956 novel about Tom and Pat Bartlett — identical teenage twins who took part in the world’s first interstellar space mission. The tale made a lasting impression on the Benfords, who shared the Bartletts’ affinity for space and were simultaneously drawn to the world of science fiction.

While still in their teens, the Benfords published 29 issues of the fanzine Void. James has since sold a few sci-fi stories, whereas Gregory has published more than 200 short stories and written 31 novels, winning two Nebula Awards along the way.

But the brothers’ main pursuit is science. Gregory is an emeritus physics professor at the University of California, Irvine. James, also a physicist, heads his own company, designing high-powered microwave systems for clients like NASA, the Jet Propulsion Laboratory (JPL), Lockheed and Boeing.

Although the Benford twins chose different professional paths, they share a dream: human travel into interstellar space, a quest they liken to the exploration of the American West. In 2013, the brothers hosted the Starship Century Symposium, where scientists and sci-fi writers gathered to advance the prospect of human expeditions to the stars within 100 years.

The Benfords’ rationale for such a journey is a modern take on Manifest Destiny: “Because we are the descendants of those primates who chose to look over the next hill,” they say. “Because we won’t survive here indefinitely. Because the stars are there, beckoning with fresh horizons.”

But how are we to reach those horizons? High-speed nuclear rockets, the often-cited next-gen vehicles of choice, are not technologically close at hand. Chemical rockets, the standard since World War II, are too slow; the fastest rocket we’ve ever launched would take 74,000 years to get to Alpha Centauri, our closest stellar neighbor. Arriving there sooner requires more fuel, but the potential gains are limited: Increasing the fuel load a hundredfold would only yield, at best, a fivefold boost in speed.

Instead, the physics appears most favorable for “sailships.” First proposed in 1962 by physicist and science fiction writer Robert L. Forward, and subsequently developed and tested by the Benfords, these spacecraft are defined by their giant sails. The vessels are similar in spirit to the sailboats Gregory and James piloted in their youth along Alabama’s Gulf Coast, but instead of exploiting the wind, these spaceships would harness the power of light.

Sailships are the conceptual descendants of solar sails, oversized kites propelled purely by sunlight, like Japan’s 46-foot-wide solar sail, IKAROS, which flew past Venus in December 2010. Unfortunately, the push from sunlight alone is rather feeble: It took IKAROS almost seven months to get to our nearest planetary neighbor. But a focused and sustained blast of electromagnetic radiation — either in the form of microwaves or lasers — would add orders of magnitude more momentum to the craft.

“The beam stays on the sail for hours as acceleration continues and velocity grows to interstellar speeds,” says James. “Ten hours would get you going really fast, about 10 percent of the speed of light.”

Whereas Forward’s fictional sailships used lasers, the Benfords prefer cheaper microwaves to power theirs. Microwave generators, or “beamers,” would initially be based on Earth but eventually could be installed on satellites that convert solar electricity into microwaves.

Gregory sees the beamer as a big-ticket infrastructure investment analogous to laying down railroad tracks. With beamers in place, sailships could be assembled in space and dispatched from there on diverse missions in almost any direction, like the trains crisscrossing continents today.

This vision remained hypothetical until 2000, when sufficiently Space Age materials — and financial support from NASA — allowed projects led by James and Gregory to start testing these ideas at JPL and UC Irvine. They were the first to demonstrate that a microwave beam could actually lift a real structure — a tiny sail, about 1.4 inches in diameter, composed of lightweight carbon fibers 10 times thinner than a human hair.

Although that first sailship was a modest one, the Benfords made a surprising discovery: The sail’s acceleration was much higher than expected because carbon monoxide trapped in the fibers rapidly boiled off, providing more thrust that turned the diminutive object into a virtual rocket. “The sail came out at 4 Gs and completely slammed into the [ceiling],” Gregory says. This unexpected effect could be exploited by manufacturing sails with special coatings or embedded materials.

A NASA researcher holds a rigid, lightweight carbon-fiber material suitable for building a large and efficient solar sail. Without such materials, the sails would be impractical. | NASA

As an extra bonus, Gregory says, “After you’ve blown this stuff off, you’ve made the sail even lighter.” And the lighter the sail, the greater the acceleration for a given force. Scaled-up versions of the experimental sails would weigh about 5 tons per square kilometer. But James believes that graphene, an ultrathin form of carbon just a single atom thick, might eventually be used in diaphanous sails weighing just 500 pounds per square kilometer.

In other experiments, the researchers found that a microwave beam can provide a restorative force that stabilizes the sail and keeps it billowed, assuming the sail has the right shape. Previous solar sails had been flat, designed that way to catch more sunlight, but it was difficult to keep them properly aligned with the sunlight. A beam-driven sailship should be concave — resembling an umbrella — to keep it aligned with the beam, so that when light waves hit the sail, they naturally tend to center it on the beam.

“What needs to happen next will be to carry out real sail experiments in space,” says Gregory. He and James almost got their chance in June 2005, when a Russian Volna rocket was scheduled to launch Cosmos 1 — a 6,415-square-foot solar sail — into space. Unfortunately, the rocket failed 83 seconds after takeoff, and Cosmos 1 never made it into orbit.

The Planetary Society has seen some success with its LightSail designs, but the Benfords’ plans are currently shelved. So, James decided to assess the economic feasibility of beamed propulsion in order to “put some numbers on this idea.” His 2013 study concluded that it would cost about $30 billion to build a beamer that can send a probe out of the solar system, but once built, the system could be operated cheaply. With four and a half hours of acceleration, a sailship could reach Pluto in one year at a cost of about $40 million. By contrast, the New Horizons space probe took almost nine and a half years to reach Pluto and cost about $700 million.

Benford’s analysis convinced James Guillochon and Avi Loeb of the Harvard-Smithsonian Center for Astrophysics that sailships might afford the most practical means of space travel, both within and out of the solar system. They also applied the idea to another sci-fi staple: aliens.

The ill-fated Cosmos 1, a solar sail experiment from 2005, would’ve been the first to fly in space, had it actually reached orbit. | John Ballentine

“It seems reasonable,” Guillochon and Loeb wrote in 2015, “that intelligent life elsewhere in the galaxy may employ similar technology to facilitate rapid transit between habitable worlds.”

In fact, Guillochon and Loeb’s calculations showed that signal leakage from an Earth-based beamer would be a million times brighter than the radio output from the sun in that same frequency. Looking for signals of this sort around other planetary systems, they said, “could define a new strategy in the search for extraterrestrial intelligence (SETI).”

“I don’t think it’s nuts,” says SETI Institute astronomer Seth Shostak, who considers the idea “clever.” James Benford also found the SETI argument intriguing, and he offered an additional twist: Knowing that leakage from their beamers would be visible elsewhere in the galaxy, advanced aliens might deliberately insert a message into the beam.

If and when we build our own apparatus for powering sailships, perhaps we’ll put a message in our beam as well — assuming, Benford adds, there is “some agreement by mankind of what we wish to say.” Maybe the twin writers can help in that department, too.