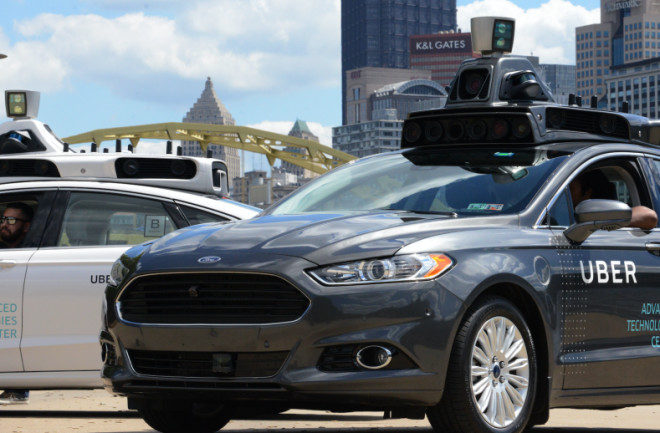 Self-driving car prototypes belonging to Uber's Advanced Technologies Center. Credit: Uber It's still too early to give a definite thumbs up or thumbs down to promises of future driverless cars reducing private car ownership by acting as robot chauffeurs. But evidence from today's ride-hailing services suggests that Uber, Lyft and Waymo may only worsen traffic congestion by crowding roads with robot taxis in the near future. The latest study from the Metropolitan Area Planning Council Research in Boston found that about 42 percent of ride-hailing passengers in the survey said they would have taken public transportation if not for the ride-hailing services. That's a strong indicator that services such as Uber and Lyft actually contribute to worse road congestion as people abandon public transit for ride-hailing services. Overall, the study estimates that 15 percent of ride-hailing trips are adding cars to area roadways during morning or afternoon rush hours in the Boston region. That's not a great sign for anyone hoping that self-driving cars will magically make the roads less congested, given that the dominant business model being tested hinges upon using self-driving cars as robot taxis.

A Ride-Hailing Tale of Many Cities

Ride-hailing's habit of creating worse traffic congestion represents a troubling pattern that goes well beyond Boston. A December 2017 report by Schaller Consulting found that ride-hailing trips seemed to be contributing to slower traffic in Manhattan's Central Business District. The report noted that average traffic speeds fell by 15 percent between 2013 and 2017. Tellingly, the combined vehicle hours for ride-hailing vehicles and taxis in the Manhattan area increased by 59 percent between 2013 and 2017: a growth that came entirely from ride-hailing vehicles given their relative scarcity in 2013. Ride-hailing vehicles alone added 92,000 vehicle hours per day by 2017. By comparison, taxi vehicle hours actually fell from 103,000 hours in 2013 to 81,000 hours per day in 2017. It's not just a New York City problem. A University of Colorado Denver study from January 2017 found that 22 percent of ride-hailing passengers using Uber and Lyft in the area would have otherwise taken public transportation. About 12 percent would have biked or walked, and another 12 percent would not have traveled at all. Again, these percentages suggest ride-hailing services have generally added to the number of cars on the roads. One of the largest surveys on this issue came from the Institute of Transportation Studies at the University of California, Davis in October 2017. Researchers surveyed more than 4,000 people in the cities of Boston, Chicago, Los Angeles, New York, San Francisco (Bay Area), Seattle, and Washington, D.C. Their results found that between 49 percent and 61 percent of ride-hailing trips would have not been made at all, or would have been made by walking, biking or public transportation. The impact of ride-hailing also translated into an average 6 percent reduction of public transit use among Americans in those cities.

It's possible the gradual introduction of self-driving cars will somehow enable software-guided ride-hailing trips and passenger pickups to become more efficient. Companies such as Waymo, Uber and Lyft have already been testing their own versions of self-driving cars--not yet fully autonomous vehicles--with the idea of making robot taxis a bigger part of ride-hailing services. But robot taxis are unlikely to change the fact that ride-hailing services seem to be pulling many passengers away from public transportation and putting them on the roads instead. That could theoretically lead to a vicious cycle in which public transportation loses ridership and public support for ongoing funding, which in turn could drive even more people to the ride-hailing services. Meanwhile, the traffic congestion would likely only grow worse as evidenced by the growing body of research on existing ride-hailing services. Several studies already mention that a majority of today's ride-hailing trips tend to involve just one passenger rather than involving ride-sharing with two or more passengers: a factor that adds to the relative inefficiency of ride-hailing trips compared to public buses or subways.

Advocates of self-driving cars and driverless vehicles may still try to sell a rosy future that has somehow replaced private car ownership and the requisite parking spaces or garages with a leaner, more efficient fleet of robot taxis. Still, it's likely that many decades will pass before robot cars begin to dominate the roads in terms of numbers. More importantly, it's entirely unclear if traffic would actually improve even in the best-case driverless car fantasy, especially if cities have neglected alternatives such as public transportation options. Today's ride-hailing cars and taxis already spend far more time on the roads than private cars, which means the individual vehicles have a much larger impact on traffic congestion at all hours. That trend would almost certainly continue with robot taxis. There are still many good reasons to develop self-driving car technologies, and especially if such technologies improve overall road safety for drivers, passengers, cyclists and pedestrians. But rather than simply ride the momentum of self-driving cars, city planners and officials would be wise to support policies that anticipate the potentially nightmarish traffic scenarios coming up ahead. Editor's Note: The initial version of this story incorrectly suggested that taxis may still have contributed a little to the growth in ride-hailing/taxi vehicle hours in the Manhattan Central Business District. The number of taxi vehicle hours actually fell between 2013 and 2017, whereas ride-hailing vehicle hours increased by 92,000 hours per day.