Paleogenetics meets one of history's most dramatic tales, and a scientist concludes he knows who’s who. 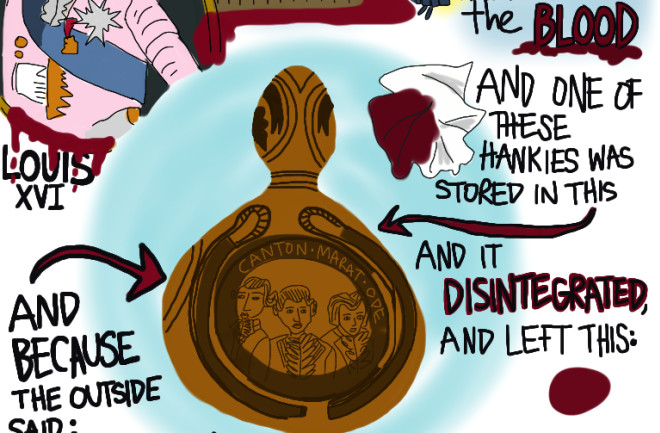 Two hundred twenty years ago today, a sad fate met Marie Antoinette and Louis XVI: the guillotine, at the advent of the French Revolution. Apparently, when beheaded, Louis bled a lot (and who can blame him?) and macabre witnesses dipped their handkerchiefs into the pool of blood.

One of them, a Maximilien Bourdaloue, was memorialized in time because a gourd was inscribed with the record of his dipping, and a handkerchief placed inside that gourd, which has since dissolved, leaving a dark spot inside.

Now geneticist Carles Lalueza-Fox, who also sequenced part of the oldest human genome on Earth from a 7,000-year-old skeleton, has turned his attentions to this gory memorial. The question was, could modern science prove it once held Louis’s blood?

Lalueza-Fox assumed, firstly, that monarchs in Europe have a rarefied bloodline- we all know they were inclined to marry a cousin or two, not very far removed. Secondly, he knew that if the blood inside the gourds were Louis’s, it would most likely match a relative’s blood.

That relative’s blood came in the form of a lousy tissue sample extracted from deep inside the embalmed head of Henry IV. The tissue was so decayed that its genetic analysis yielded only six alleles, or sequences of DNA.

However these were apparently six rare-enough alleles that they had no matches with 40,000 other samples of DNA from a database Lalueza-Fox was using. He then extracted DNA from the dark spot inside the gourd, a more fruitful yield, and determined that five of six alleles between the samples of DNA matched. He also found that the gourd DNA contained the gene for blue eyes, another confirming detail, as Louis was famous for his “bulging” blue eyes. Thus the scientist has announced that the gourd and the shriveled head are indeed related, and their presumed identities are Good King Henry and Louis XVI.

Lalueza-Fox hopes to continue probing the spot of blood, sequencing the king's entire genome as soon as possible. If only he could gain access to the dried heart of the king's son, Louis XVII, who died at a young age, he might be able to further confirm these bloody, royal, eroding connections.