Researchers Use Lasers to Control the Beating of a Heart 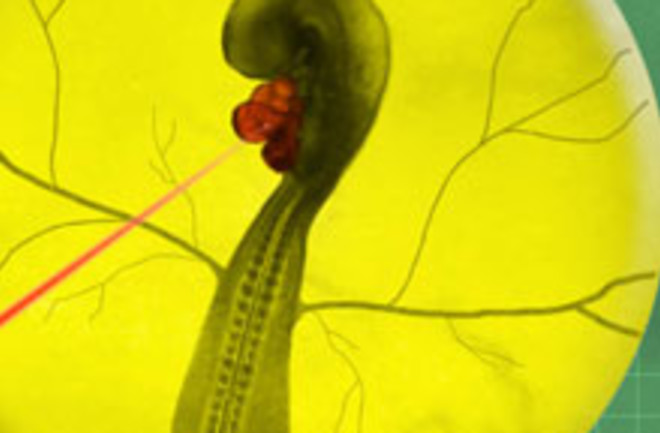 In early 2010, some scientists offered their predictions for the new decade which this blog covered in the post, "Scientists Predict: The 2010s Will Be Freakin' Awesome--With Lasers." In what could be an early sign of that sunny prognostication coming true, researchers have announced that they've controlled the beating of an embryonic heart with an infrared laser beam. While the work is in its early stages, researchers say this remarkable advance will help them study heart disease and could one day lead to optical pacemakers. The embryonic hearts in question came from quail eggs. Each quail embryo was only two or three days old so the heart measured just 2 cubic millimeters in volume; at that stage, the heart is essentially a clump of cells that hasn't yet developed its four-chambered structure. The pulses of infrared light were delivered by an optical fiber that ended 500 micrometres from the embryo.

Before they switched on the laser, the heart beat once every 1.5 seconds, but firing the laser twice a second quickened the heartbeat to match the laser rate as long as the laser fired.... "It worked beautifully: the heart rate was in lockstep with the laser pulse rate," says [study coauthor] Duco Jansen of Vanderbilt University in Nashville, Tennessee. [New Scientist]

Several years ago, a different scientific team showed that laser pulses could set the pace of a cluster of heart cells in a petri dish, but the new study

, published in Nature Photonics, marks the first time a laser has set the pace of an entire heart. Lead author Michael Jenkins of Case Western Reserve University says the technique will offer a new way to study heart development.

"We want to know how congenital heart defects form, and how the heart's rhythms during development affect it later on," he says. "Having a noninvasive way to modify the heart rate would be useful." [ScienceNOW]

At the energy level used the laser pulses didn't appear to damage the cells, but the researchers intend to thoroughly investigate the safety of the process. They'll also be looking into other details--like how exactly this mechanism works. At the moment, it's still unclear.

They suggest that it might create a temperature gradient that can stimulate "action potential in excitable tissues," as was also proposed in earlier work on clusters of cardiomyocytes. [Scientific American]

Related Content: 80beats: “Anti-Laser” Would Absorb the Light a Laser Shoots out

80beats: Researchers Flip Brain Cells On and Off With Light Pulses

80beats: Scientists Predict the 2010s Will Be Freakin' Awesome--With Lasers