Researchers Create "Omniphobic" Materials That Repel Both Oil and Water 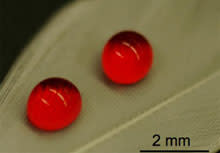 Researchers have long known how to create surfaces that repel water (they just had to look at a duck's back for an example), but how to repel oily liquids was a mystery until last year, when a team of MIT chemists

created a material antisocial enough to repel liquids of both kinds. They have gone one better than nature, which is not known to have made materials with such properties. [Researchers] even had to coin a new word to describe their creation - "omniphobic" - literally meaning it hates everything [New Scientist].

Now, the same researchers have pushed the technology another step forward, by developing a set of general design rules for omniphobic materials and by altering existing items--like, for example, duck feathers--to make them repel both oil and water.

One of the biggest differences between water and an oily liquid such as octane, a component of petroleum, is surface tension. A droplet of a fluid with high surface tension — such as water — tends to pull itself into a sphere, whereas one with low surface tension, such as oil, tends to spread across a surface more readily [Science News].

Researchers first created a surface covered in 300-nanometer-tall "toadstools," which allowed even oily liquids with low surface tension to remain in tight spherical droplets, essentially sitting on the toadstools' caps. In the next step, researchers examined the microstructures that repel water from duck feathers, and saw that the feathers

are covered with microscopic 'barbules' that trap air pockets between the liquid and feather. The surface tension of water is enough to hold the droplets together, forming beads that roll off instead of absorbing. By adjusting the surface chemistry of the feathers - where the size, shape and spacing of the microstructures are fixed - the surface can be changed to resist other liquids too. [Chemistry World].

In the study, which will appear in an upcoming issue of Proceedings of the National Academy of Sciences, researchers gave a feather a thin coating of microfibers, and watched the red droplets of oil roll harmlessly along the feather's surface. David Quéré, a materials science expert, says there could be a big market for this technology:

Many concrete and glass companies have been interested in similar surfaces to improve their materials, he says. "But when you put this texture on the surface of a solid it is very easily destroyed - [the toadstools] are quite fragile." If they could be made more robust, they could make easy-to-clean surfaces that are difficult to soil with either watery or oily dirt [New Scientist].

Related Content: 80beats: “Nanosponge” Could Soak Up Oil Spills DISCOVER: Teflon-ized Frog Chemical Could Save You From Disease

EnvironmentRare Earth Elements are Crucial to Modern Society. So, What Are They?
Recommendations From Our Store