Bad news: It can't carry you around. Good news: It might help explore another planet. 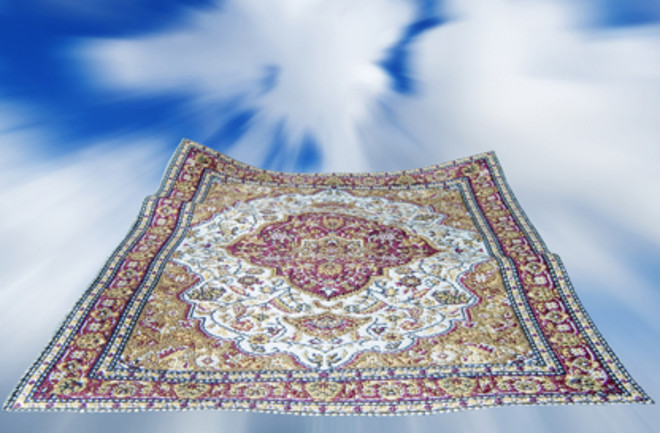 We’ve all seen lectures go awry when plastic transparencies slide off projectors, but L. Mahadevan was probably the first to seriously analyze a plastic sheet’s fall from grace. It is even safer to assume he was the first to use it as a model for a flying carpet. Now, due to Mahadevan’s curiosity and an enterprising grad student, scientists have created an electrically powered sheet that propels itself through the air.

In 2007 Mahadevan, a mathematician at Harvard University, turned his analysis into a proposal for coaxing a flexible sheet to fly [pdf] just above the ground. His study concluded that a thin sheet rapidly vibrating in a wavelike motion, much like a ray swimming near the seafloor, would stay aloft.

Mahadevan never built his flying carpet—he moved on to analyzing how wet paper curls and lilies bloom. But in 2008 Princeton graduate student Noah Jafferis came across Mahadevan’s paper and put the idea into practice. What Jafferis produced last fall isn’t exactly a flying carpet. It is more like a 4-by-1.5-inch plastic transport, but it’s still the first object of its kind to achieve propulsion through the air.

Jafferis constructed his carpet from two sheets of coated plastic that are fastened together and divided into four sections each. When a voltage is applied, parts of the surface contract while others expand, causing the sheet to bend in the shape of a moving water wave. The wave pushes air trapped between the sheet and the ground in one direction, while propelling the sheet the opposite way. “So long as the sheet is moving forward, it will stay aloft,” Jafferis says.

For now, his craft gets its power through four-inch wires attached to an external battery, seriously limiting its range. Jafferis hopes to untether it by installing a power source on the craft itself. Unfortunately, his long-term plans have nothing to do with Arabian Nights. “We’d need a surface 50 feet wide to carry a person,” he says, “and that would get just a millimeter or two off the ground.” Instead, he has conjured up the idea of a carpet that could fly above the dusty surface of Mars.