The 7,000-year-old milk residue may mark the birth of the modern dairy industry. 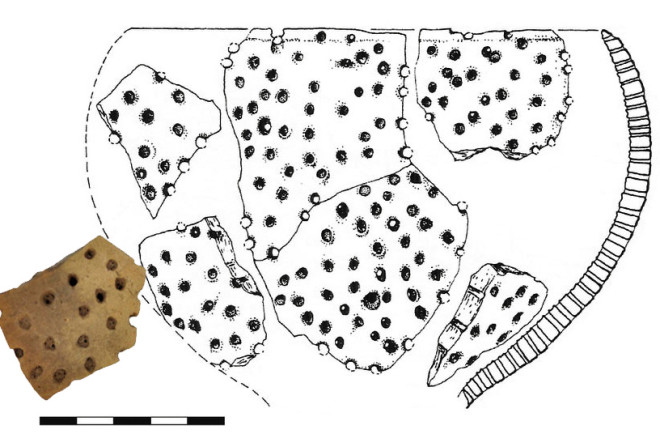 These ancient pottery shards could represent the birth of the modern dairy industry. | Melanie Salque / Nature

Move over, 15-year cheddar. Researchers believe they may have found a sample of cheese residue dating back some 7,000 years — the earliest known appearance of the preserved dairy product.

Archaeologists began uncovering ancient pieces of hole-riddled pottery in Poland in the 1920s and ’30s. The reassembled ceramics immediately brought to mind modern cheese strainers for Princeton anthropologist Peter Bogucki, who published a paper on them in 1984.

It was something that always interested organic geochemist and prehistoric dairy sleuth Richard Evershed of the University of Bristol, so he decided to find out for sure. He performed forensic tests on the fatty residues inside the pottery and confirmed they were milk-derived.

It’s not certain the contents were cheese, Evershed says, but “they clearly were straining some sort of dairy products.” Cheese is the most obvious answer. It forms when milk is mixed with enzymes from a mammal’s stomach called rennet. The combo coagulates into solid cheese curds, which can then be strained from the leftover liquid whey. The cheese-making process is so easy, in fact, that Evershed thinks the pottery makers, probably the first farmers in Europe, likely discovered the method accidentally by using dried animal stomachs to store their milk.

The cheese strainer represents both a technological and cultural milestone for early Neolithic farmers, Evershed said.

“You’ve actually got a manufactured gizmo to fulfill some domestic cookery function,” he says. “Basically, this is where the template of what is now the global dairying industry started.”

[This article originally appeared in print as "Extremely Aged Cheese."]