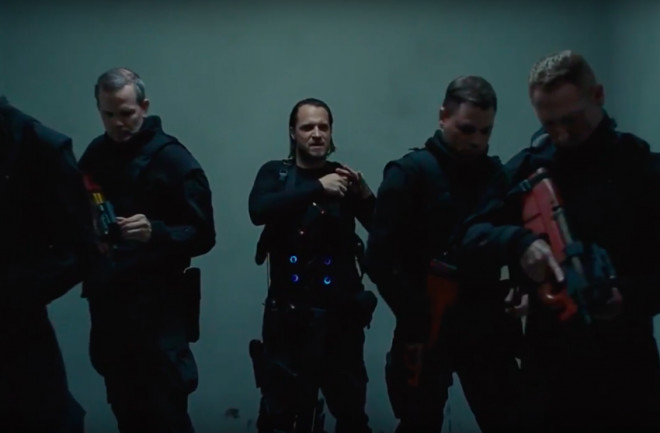 Private military contractors wearing haptic vests in the show "Westworld." Credit: HBO Most of the HBO show "Westworld" focuses on artificial intelligence and android robots that seem indistinguishable from humans. But the show has also occasionally snuck in some real-world technology that seems futuristic enough to blend in with the science fiction setting. One example of such real technology in "Westworld" comes in the form of haptic vests that made their debut in the show's second season. Freeze all motor functions and turn back now if you want to avoid spoilers about the second season. All good? OK, you've been warned. Welcome to Westworld. With a full-blown killer robot revolution underway in Westworld and its sister theme parks, the Delos Corporation sends in heavily-armed private military contractors in an attempt to regain control. In the episode titled "Les Écorchés," the PMCs go into battle wearing special haptic vests that can transmit patterns of vibrations indicating the direction and possible location of nearby hosts. That idea that first came up during a "Westworld" writers' room brainstorming session with neuroscientist David Eagleman, an adjunct professor in the department of psychiatry & behavioral sciences at Stanford University, over a year ago. "Because the hosts are in a mesh network with each other and their locations are known, it seems like an obvious thing for private military contractors that drop in to be able to tell where they are," Eagleman says. The geolocation tracking is made possible in the show by the private military contractors tapping into the hosts' mesh network that allows the robots to wirelessly communicate with one another. That information about each host's location then gets transmitted to the vests worn by the humans, which appear to light up with red lights accompanying the vibrations warning of possible killer robot threats. What's more remarkable is that the "Westworld" haptic vests are based on real-life technology designed by Eagleman and his Palo Alto startup called NeoSensory that could help blind people "see" the real world and deaf people "hear" sounds through vibration patterns. Eagleman previously demonstrated the VEST (Versatile Extra-Sensory Transducer) technology during a March 2015 TED talk. "The idea is passing information to the brain via patterns of touch on the skin, and we can really pass any type of information stream in there," Eagleman says. "Over the next few years, we're going to continue finding out which things are the most useful." https://www.youtube.com/watch?v=4c1lqFXHvqI

NeoSensory has developed both a vest and a wristband version of the VEST technology that can enable deaf people to feel different sounds in the world through the vibrations on their skin. Eagleman describes an "extremely fast learning curve" based on deaf people's experiences of testing the technology. It's a powerful testament to the brain's capability for adapting to new sources of sensory input. "On day one, when they first put on the wristband, they can tell right away the difference between a dog barking and a baby crying and a smoke detector and a siren on the road and a car passing," Eagleman explains. "So the fact that it's extremely intuitive is kind of the interesting and surprising part." The vest version of the technology costs about $2,000, but the wristband version known as The Buzz may cost just several hundred dollars. That could prove truly disruptive given that the current costs for a cochlear implant—a surgically implanted electronic device that transforms sounds into electric impulses—can reach as high as $100,000 for both the surgery and device. Such high costs explain why a relatively small fraction of the 77 million people in the deaf community worldwide is currently using cochlear implants. A mass manufactured version of the wristband won't likely reach the market before January 2019. But NeoSensory has already been working to get prototypes into schools for the deaf in Thailand and India. "We're just going to work to get this all around the world as fast as possible," Eagleman says.

Giving New Sight to the Blind

A more experimental version of the VEST technology could help blind people easily navigate around crowded rooms. This relies upon continuously mapping the location of people or objects in the room with sensor technologies such as LIDAR or Microsoft's motion-based Kinect sensor. Once those locations are all known, the information gets transmitted in a way that enables the vest wearer to feel where everyone was even as people moved around. Early testing with a blind participant showed that there was once again "zero learning curve," Eagleman says. The person could immediately tell if, for example, someone was on his left coming toward him and eventually moving around behind or in front of him.

A behind-the-scenes look at an actor wearing a haptic vest based on real-life technology by the company NeoSensory. Credit: HBO This particular application inspired Eagleman to suggest the fictional military use of the technology in "Westworld." Given that the private military contractors could generally track the locations of the hosts, the vests could have provided even more utility than the "eyes in the dark" application described in the show. In theory, such vests could have warned wearers about a potential enemy on the other side of a wall or crouched behind a box in more of a "sixth sense" fashion. "Imagine if you're dropping into Westworld, to know there's one on my left a third of a mile away on the other side of that building, and there's one behind me a half a mile away," Eagleman says. "That was sort of the original idea." The "Westworld" creators apparently decided that would give the humans too much of an edge over the killer robots, because they reduced the effective range of the vest technology to just 30 feet. Beyond initially showing a private military contractor relying on the vest's warnings to take out several robot hosts in a darkened room, the show did not display much more about the full potential of such technology. And in the end, the army of killer robots overcame the private military contractors—perhaps not a complete surprise given their less-than-impressive tactics and behavior. "Unfortunately, the humans wearing the vests died quite rapidly," Eagleman says. "So I was joking to my friends that next time we'll put the vests on the hosts."

Curious to hear more about a neuroscientist's thoughts on how "Westworld" depicts artificial intelligence and human consciousness? You can read more in this extended Q&A with David Eagleman.