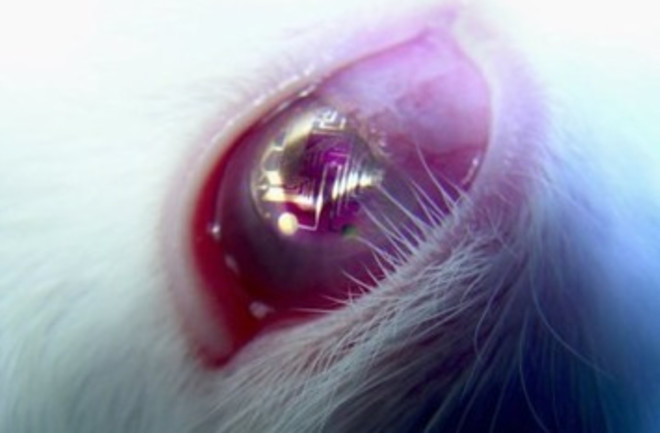 Bionic contact lenses---which would display navigation data, personal emails, or any other sort of info superimposed on the world before your eyes---have long been mainstays of science fiction. Over the past several years, researchers have been working to make the tech real-world ready, striving to find solutions to the energy, size, safety, and image-quality problems that come up when you're trying to fit a tiny integrated circuit into something transparent that sits on an eyeball. Now, University of Washington researchers and their Finnish colleagues have made the first functioning bionic lens: a prototype with a single LED pixel, which could be safely worn by rabbits in the lab. (The image at right shows a rabbit wearing an earlier version of the lens, which contained a circuit but no light-emitting components.) Radio frequency energy emitted from a nearby transmitter and picked up by a circular antenna a fifth of an inch in diameter, printed on the lens, powered the electronics. The transmitter supplied adequate energy from three feet away when the lens was sitting in a dish, but had to be less than an inch away when the lens was placed on a rabbit's eye, since tissues and fluids in the body interfered with reception. Since light from such a lens would be too close for the human eye to focus, the researchers made a separate contact composed of an array of smaller, flatter lenses, which would sit on top of the bionic contact and focus the light. There are still some significant improvements that need to happen before such lenses can display messages or integrate with navigation systems, including larger wireless range, higher pixel count, and human safety tests. But even a single-pixel bionic lens, the researchers wrote, "could be used in gaming, training, or giving warnings to the hearing impaired." Read more at New Scientist and Discovery News. Reference: A. R. Lingley et al. "A single-pixel wireless contact lens display." Journal of Micromechanics and Microengineering, November 22, 2011. DOI: 10.1088/0960-1317/21/12/125014

Image courtesy of University of Washington