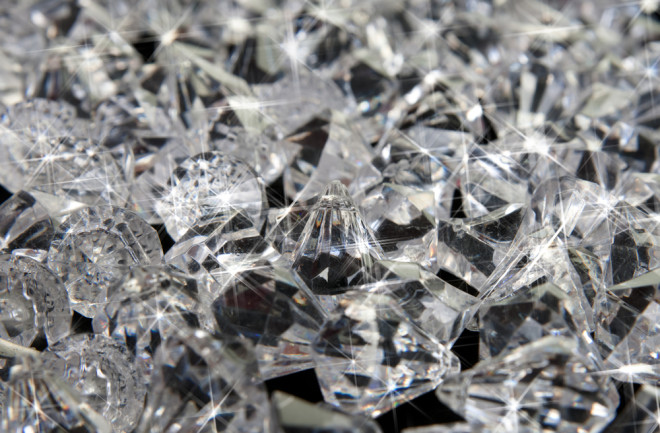 (Credit: clearviewstock/Shutterstock) Long ago, ancient scientists attempted to master the craft of alchemy, or the mythical process of turning lead into gold. Alchemy has since been proven to be a hopeless task, but modern scientists have successfully unlocked the secrets to an even more stunning transformation: turning carbon, the basic building block of life, into diamonds. A new, simple carbon-transforming technique that uses a laser to produce tiny diamond "seeds" is yielding even more sparkling results. Researchers, in a new study, used their method to create an entirely new phase of carbon that surpasses even diamonds in terms of hardness, and the new material could have a number of applications in medical and industrial fields. Many New Properties Researchers at North Carolina State University used a laser to craft the new hardest rock on the block, which they named Q-carbon. The novel substance possesses a host of useful properties, such as ferromagnetism, fluorescence and the ability to conduct electricity, making Q-carbon a potentially useful material for scientists and industrialists. In their findings, which were published this week in the Journal of Applied Physics, researchers estimate that Q-carbon is 60 percent harder than diamond, which is a result of tighter bonds between the atoms in Q-carbon's structure. To create the new substance, the researchers used a laser to deliver a quick, 200-nanosecond burst of energy to an amorphous (having no definite shape or form) carbon film, heating it to 6,740 degrees Fahrenheit. The laser jolt melted the carbon, which then cooled rapidly to form a crystal lattice structure.Depending on the energy levels and cooling period, the carbon would crystallize into either microscopic diamonds or Q-carbon. The cooling process is known as "quenching," and it's also the inspiration behind the carbon structure's name. The process is also speedy, enabling the researchers to make a carat of diamonds in about 15 minutes.

Tiny diamonds that were made using researchers' new laser technique. (Credit: Jagdish Narayan and Anagh Bhaumik) The discovery of Q-carbon reveals a new solid phase of carbon, or a different way of arranging carbon atoms. Until now, graphite and diamond were the only known solid phases of carbon. Q-carbon only forms under extreme conditions, making it unlikely to exist in nature except at the cores of some planets, study author Jay Narayan suggested in an interview with the New York Times. Easy to Create A key feature of this process is that it takes place at room pressure and temperature. Current artificial diamond manufacturing techniques require equipment capable of generating extremely high pressures and temperatures or catalyzing gasses. Using lasers to create diamonds, on the other hand, is simple and inexpensive, has potential to revolutionize the production of synthetic diamonds, which are currently used as components in drill bits, lasers and heat sinks, among other uses. Researchers also created different shapes with diamonds using this process by varying the substrate on which the heated carbon was cooled. A plate of sapphire, glass or polymer plastic, for example, yielded different configurations. The team created forms as varied as needles, dots and films made of diamond, shapes which could be used to deliver drugs, manufacture smartphone screens or in electrical components. And if you'd like to try your hand at "diamond" production,you could always try using the microwave.