A sonic shield could safely drive birds away from farm fields and tall buildings. 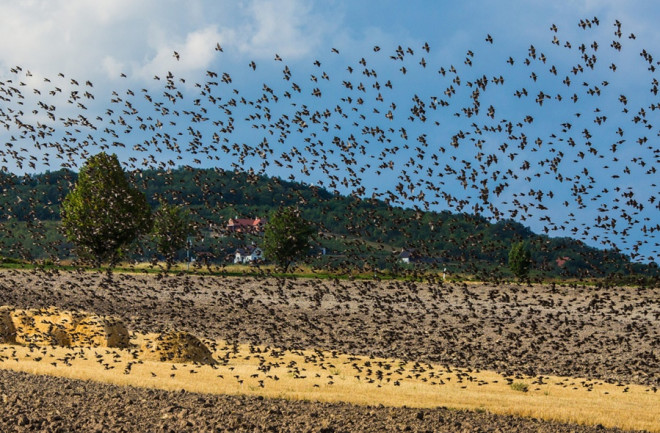 A flock of starlings in an agricultural field. Martchan/Shutterstock

Farmers aren’t much better than scarecrows when it comes to protecting harvests from pesky birds: Avian interlopers cost the United States roughly $1.9 billion each year in crop losses and damage control. Now researchers have landed on a potential solution that uses speakers to send out a directional buzzing noise — a sonic shield — to keep feathered pests away from farm fields as well as tall buildings.

Since birds vocalize to alert each other to predators and food sources, biologists John Swaddle and Ghazi Mahjoub and acoustician Mark Hinders of the College of William & Mary hypothesized that interrupting the conversations would increase birds’ vigilance, leaving less time for loitering and dining. Indeed, in tests at the college aviaries, food patches subjected to eight hours of the so-called sonic net saw a 46 percent drop in bird presence compared with control groups. It proved to be a more lasting and safer deterrent than other tactics, such as high-tech pyrotechnics and poisons.

Tests are ongoing at Virginia agricultural fields and airports, with plans to test the net on large urban structures, such as cell towers and skyscrapers, to help prevent bird strikes. The researchers are also exploring how their sonic net can reduce crop loss in sub-Saharan Africa.

Hinders likens the device’s effect to being at a cocktail party. “You’re in a room where a lot of other people are talking. It can be difficult to follow an individual conversation,” he says. “It doesn’t even have to be especially loud. We fill in the gaps in their conversations with noise.”

And by crashing the party, the sonic net could save the birds and our crops.

[This article originally appeared in print as "Acoustic Armor."]