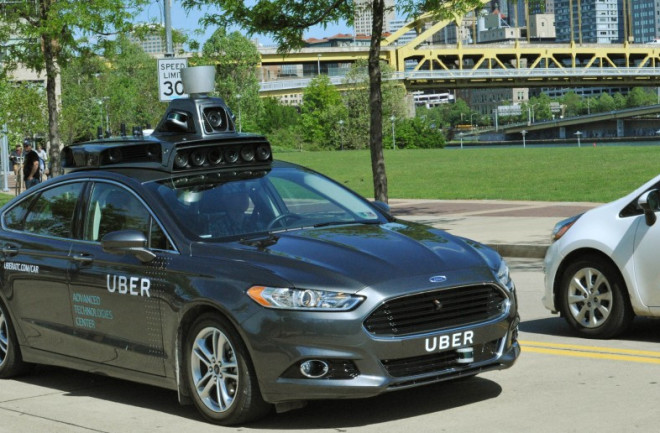 A prototype self-driving car based on a hybrid Ford Fusion and developed by the Uber’s Advanced Technologies Center (ATC) in Pittsburgh. Credit: Uber Robot taxis represent one of the first goals for both tech giants and automakers developing self-driving cars. Popular ridesharing services such as Uber and Lyft have also made plans to eventually switch over from human drivers to self-driving cars. But a recent study suggests many Americans may not be willing to pay more for the privilege of riding a robot taxi compared with hailing a human driver. Adults surveyed on self-driving car technology were mostly unwilling to pay more than $1 per mile to use a robot taxi, according to recent research by The University of Texas at Austin. By comparison, the cost of hailing a car using a ridesharing service such as Uber or Lyft costs about $1.50 per mile on average. About 41 percent of the study participants expected to use robot taxis at least once a week if they cost $1 per mile. But the percentage of willing robot taxi customers dropped to just 15 percent at a cost of $2 per mile and 3 percent at $3 per mile. The people who participated in the study consisted of 350 adults living in Austin, Texas. Google has already been testing its self-driving cars in Austin and several other cities, which helps explain why 80 percent of the study participants had awareness of Google's robot cars. About 85 percent also had awareness of ridesharing services such as Uber and Lyft; not a surprise given the popularity of both services in Austin. Overall, study participants tended to be women, middle-aged persons (25-44 years old), and had a bachelor's degree or higher. In other words, the study participants represented a relatively mature and tech-savvy group of Americans living in one of the country's thriving tech hubs. Their attitudes toward using robot taxis also fell in line with findings from previous carsharing studies. For example, people who lived in denser neighborhoods tended to be more interested in using the robot taxis regardless of the price; perhaps an indication of less convenient parking and fewer people owning their own cars in those neighborhoods. One survey of Austin residents should not be mistaken as representing the views of the entire U.S. population. But the study's focus on a tech-savvy group of Americans may prove helpful in suggesting what the likeliest customers for robot taxis will tolerate in terms of pricing. The message seems clear in this case; people are less enthusiastic about using robot taxis if the cost of a ride is higher than the fares offered by today's ridesharing services. Studies such as this could have huge implications for Google and other companies that plan to deploy robot taxis. The Google-owned company Waze recently launched its own ridesharing service, according to the Wall Street Journal. Such a service may compete with Uber, the ridesharing service that has been developing its own self-driving car technology with an eye toward robot taxis replacing human drivers. It would also pose a challenge to Lyft, a ridesharing service rival that has teamed up with U.S. automaker General Motors on deploying self-driving versions of Chevrolet Bolt electric taxis. A robot taxi service might possibly justify higher fares by offering additional benefits, such as improved driving safety on the road or minimizing the risk of harassment between drivers and passengers. But if any robot taxi service really wants to be competitive, it might do well to keep fares from going higher than those offered by today's human drivers. To read more on the study, see the paper titled "Assessing public opinions of and interest in new vehicle technologies: An Austin perspective" that is detailed in the June issue of the journal Transportation Research Part C: Emerging Technologies. You can also check out an pre-publication draft of the paper on the website of the Cockrell School of Engineering at The University of Texas at Austin.