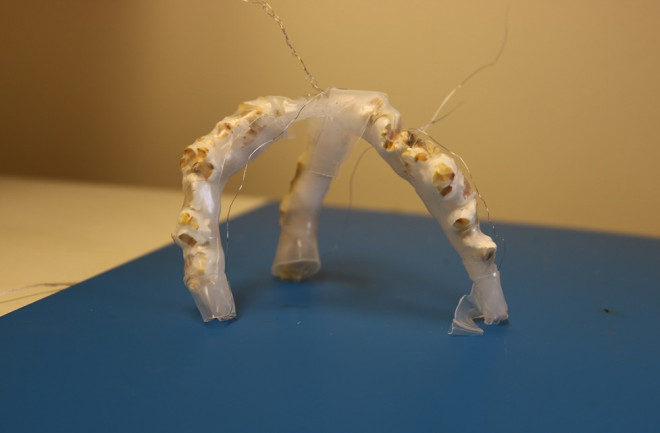 A soft robotic device powered by popcorn, constructed by researchers in Cornell’s Collective Embodied Intelligence Lab. (Credit: Cornell University) Robots have always been cool and futuristic. Since we live in such ultra-modern times we’re seeing more and more of them, whether it’s to clean our floors, drive our cars or even give us extra limbs. But usually the focus is on what robots can now do, and less on what actually powers their abilities. Not today: A team of Cornell engineers has shown how to power simple robots not with electricity or hydraulics, but popcorn. You know, like the kind you eat.

Popcorn is actually pretty neat, if you think about it. Apply heat to the tiny, regular kernels and they can expand into irregular shapes more than 10 times larger. Their density and viscosity changes, and the transition takes place fairly quickly, with surprising force. Plus, they’re a natural, inexpensive and abundant material. (And tasty, though that’s just a bonus.) In their paper, actually titled “Popcorn-Driven Robotic Actuators” the team looks at the physics of popping corn, “including expansion ratio, transition temperature, popping force, compression strength, and biodegradability.” They actually found a variety of possible applications, and even built a few simple robots that use corn-popping as their power source. It looks like it could really work.

The popcorn robots won’t be taking over the world anytime soon (or even walking), but they can grip objects, and lift weights by expanding and changing rigidity. The engineers achieved this by lining a robot’s “fingers” or insides with raw kernels and a heating wire. When the kernels burst open, they exert tension on the sleeve holding them in a process analogous to tensing muscles. Deploy enough of these robots and those simple movements could really add up — especially considering they’d be autonomous and numerous, since the power supply is so cheap. Even the most obvious drawback — it could only work once, since popping corn is irreversible — might have workarounds. Popped corn dissolves in water, for example, so it could be possible to clear out ‘used’ popcorn to bring a machine back to its original state. As this is the first time scientists have seriously considered using popcorn in this way, many more possibilities are possible. This could be the start of a new type of (edible) robotics! “In summary, many robotic applications may benefit from the use of these multi-functional kernels,” the authors write. "In the near future, we aim to design the infrastructure necessary for stand-alone popcorn-driven robots. This will require an embedded system capable of heating the kernels, and a pump capable of moving the kernels. Long term, the work on multi-functional granular fluids presented in this paper may help pave the way for a wide range of applications spanning the fields of rigid, compliant, and soft robots.” The future looks bright, fluffy and delicious.