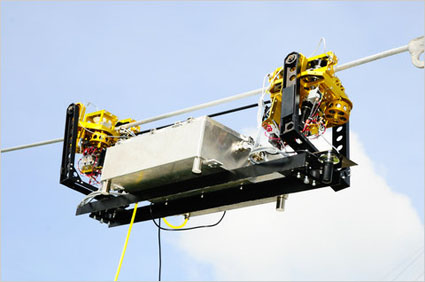 If you see a five-foot-long, 145-pound robotic stranger roaming your neighborhood in the near future, don't be alarmed. It may just be TI, your friendly, box-shaped power line inspector, who may soon be coming to a power line near you. Created by the Electric Power Research Institute (EPRI), TI--short for Transmission Inspection--is designed to tightrope along power lines in search of flaws. Since power lines aren't designed to hold heavy robots, TI technically travels along shield wires, the metal lines that hang above power lines to shield them from lightning. As TI plods along power lines, covering a few miles each day, he's able to independently evaluate the data his sensors gather--and if he finds a glitch in the power flow, he calls it in via radio signal. In addition to the automatic mode, TI's computerized "Cirque du Soleil" act can also be controlled remotely. When it comes to perceiving power line flaws, TI is as good as human. Infrared sensors monitor hot spots on wires, while lidar-equipped sensors use scattered light to tell whether power lines are too close to tree branches or other menaces. On top of all this, TI also picks up on electrical disturbances and sports a topnotch optical camera for more in-depth scrutiny--especially handy for anyone enamored by still life portraits of electrified squirrels. You might think solar power would be the perfect energy source for an air-dangling robot, but TI actually harnesses the energy coursing through the lines. As the New York Times reports:

It works like this: the alternating current in the conductors creates a magnetic field. The field interacts with the shield wire to produce electricity. Every night, the robot docks at a tower where it connects the shield wire to the tower, creating a circuit and a current flow. It charges up its battery and departs at dawn.

Although TI is only a prototype and is slated to undergo more testing, the hope is that this robot will relieve humans of the sometimes-treacherous and always-tedious task of inspecting the nation's many power lines, possibly saving lives in the process. Now that TI is no longer a stranger, the thought of an all-seeing, self-powering, autonomous robot traveling overhead might be your main concern. But don't worry--with a maximum speed of 5 miles per hour, TI is slower than a jogging grandma in slippers. Related Content: Discoblog: How Batman Would Steal Electricity Discoblog: A Stupid Way to Get Electricity for Free: Meat Hook + Power Line Discoblog: Video: Watch a Sprinting Robot Fall Down Discoblog: Robot, Build Thyself: Machine Made of Lego Builds Models Made of Lego DISCOVER: 20 Things You Didn't Know About... RobotsImage: Electric Power Research Institute