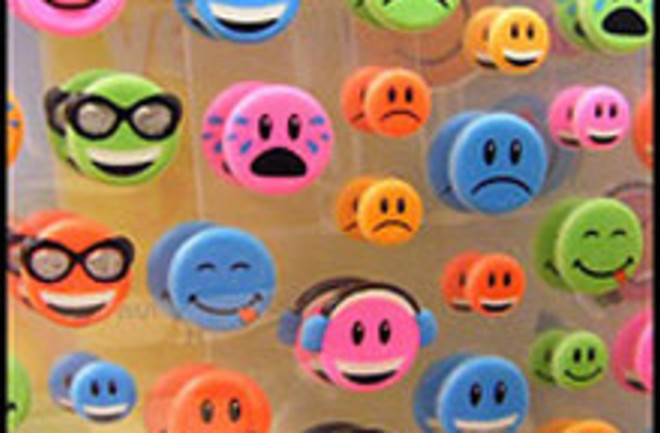 Evaluating the happiness of an entire society is tricky--after all, the traditional survey-based method of collecting data doesn't work for such a huge population. But now scientists say they have come up with a way to quantify the well-being of a society: by analyzing song lyrics and blog posts for emotionally charged words, according to a study published in the Journal of Happiness Studies. Among their findings, researchers determined that bloggers in their 50s and 60s are most content, and that popular music has become increasingly less happy since the 1960s. To evaluate the overall happiness of the public, researchers pulled data from nearly two-and-a-half million blogs and 230,000 song lyrics. With the aid of their own computers, the researchers scanned the texts for more than 1000 emotionally charged words that a 1999 psychology study had ranked on a scale from 1 (miserable) to 9 (ecstatic). "Triumphant" and "love" topped the list with average scores greater than 8.7, whereas "disgusted" was one of the lowest at 2.45. The researchers then calculated an average happiness score for each text based on the words' scores and frequencies

They found that although certain days of the year always show fluctuations in the blog world (Christmas and Valentine's Day show a spike in happiness, while September 11 shows a dip in well-being), overall happiness among the bloggers since 2005 has increased about 4 percent. The scientists also looked at patterns among the blogs based on bloggers' demographics, finding that men and women are equally happy, but that women are more likely to write emotionally extreme words. The researchers also analyzed the emotional content of blogs by the age of the blogger, and they found a curious pattern. Teenagers, true to form, rated the lowest, with an abundance of “sick,” “hate” and “stupid” [

Happy words gradually increase with blogger age until their frequency begins to drop again around age 70, when the word "sick" begins to reappear. In the study's musical component, researchers found that songs have become increasingly negative since 1960 due to the rise of more "negative" types of music such as heavy metal. However, positivity levels have not changed within musical genres, the researchers said. But how much can this study really tell us about our society's happiness as a whole? “The approach is interesting, but I don’t see any evidence that the method produces a valid population-based measure of well-being”

Uli Schimmack. The study's authors admit that even though the methods evaluated only a certain segment of the population, they were intrigued by the variance in happiness within the sample. “Now, these are bloggers, and they certainly are not representative of everyone,” [co-author Peter] Dodds said. “But the pattern is very pronounced.”

Researchers hope to expand the technique to encompass people around the globe, and even to make predictions, such as about the correlation between length of life and happiness.