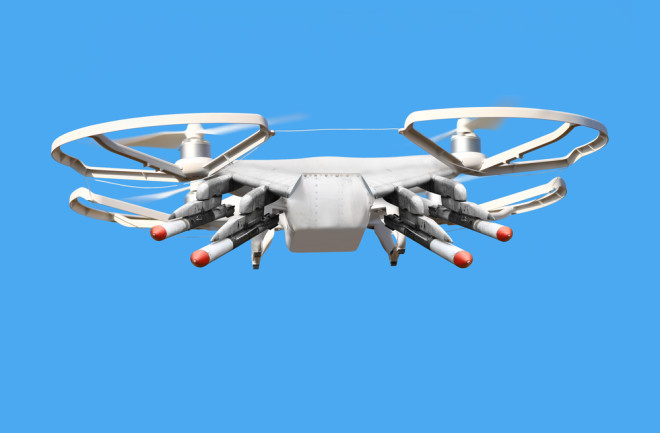 (Illustration credit: Kletr/Shutterstock) Police in North Dakota can now use drones, or unmanned aerial vehicles (UAVs), equipped with less-than-lethal weaponry such as Tasers, pepper spray and rubber bullets. Legislation that came into effect in August specifically allows this. The original bill was intended to prohibit all weapons on police drones. State Republican Rick Becker, who presented the bill, said its aim was to ensure that police obtain search warrants when using drones in criminal searches. However, a successful amendment by a lobbyist for the North Dakota Peace Officers Association meant the bill prohibited equipping drones with lethal weaponry only. A disappointed Becker is opposed to attaching weapons of any description to drones, saying:

"… there should be a nice, red line: drones should not be weaponized. Period."

The use of drones by authorities has increased around the globe. In the US, drones have been used not only for police surveillance and in operations, but also to patrol its southern borders. Police forces in the UK, Greece and other European countries are using drones in similar ways, as is Australia. There is a consistency in the stated rationale for this use: Drones are an effective way of gathering intelligence in situations that are unsafe for officers or impractical for helicopters. In Australia, for instance, drones have been touted for use in bushfire situations, for search-and-rescue missions and for gathering intelligence in drug-related crimes. On the whole, civil libertarians do not take issue with these stated uses. As information-gathering technology begins to outstrip legislation, however, there is nervousness about privacy issues related to surveillance by drones and the ways that authorities may ultimately use any information gathered. UAV use for border control has also created concerns about diplomatic relations.

Drone technology creates a potential for “mission creep”. Like many weapons in today’s police arsenal, UAVs were initially designed for military use. Drones have been used in armed conflict in Palestine, Pakistan and Syria. Although these military drones are equipped with lethal weaponry and are much larger than the drones that police forces use, all UAVs are operated remotely via a laptop with a game-like console. This is part of their appeal: personnel can unleash lethal force without exposure to counterforce.

The Globalhawk UAV. (Credit: Paul Drabot/Shutterstock) This remote control is, however, also a source of great concern. While remotely controlling weaponry makes sense in war zones, it comes with risks in civilian situations as it sets police apart from the citizenry rather than as a constituent of it. Recent concerns about the militarization of police forces reappear in discussions of domestic authorities' use of drone technology. Last year in Ferguson, Missouri, when public anger at the police shooting of Michael Brown spilled into the streets, heavily armed police clad in khaki military-style uniforms rolled in on an “Bearcat” armored truck, most commonly used in war zones. This response triggered a discussion among Americans about the militarization not only of police weapons but also of police tactics. Notably, these tactics include an aggressive approach to crowd control. In the late 1990s and early 2000s, police approaches to crowd control changed in the US, Australia and in Europe. “Negotiated management” strategies, which involved a consultative approach to crowds and a high tolerance for minor infractions such as swearing, gave way to a “command and control” approach. This was characterized by zero tolerance for misdemeanors and the aggressive control or physical proscription of public areas for the purposes of peaceful protest. Such policing reflected the ideology that all crowds were mobs just waiting to happen. Policing at the APEC summit in Sydney in 2007, the G20 in London in 2009 and recently during Hong Kong’s Umbrella Revolution are paradigmatic of command and control approaches. It has become commonplace for protesters to be confronted by or even outnumbered by police. Indian and South African authorities have embraced the technology for use in crowd situations, including protests. Officials described the equipment as a very effective form of “mob control”, which enables the dispersion of “violent protesters”.

What, then, do these uses and the US move to equip drones with less-than-lethal weaponry mean for crowd control in Australia? It’s hard to say. In Australia, criticism of over-the-top approaches to crowd control has led to their softening, but their effect lingers. New South Wales police acquired a A$700,000 water cannon, which was sent to Queensland for the 2014 G20 meeting in Brisbane. The use of capsicum spray is increasingly common. In Victoria, police have the power to disperse peaceful protesters if they suspect a crowd may become unruly. There are already concerns in Australia about the rate of escalation of force at some protests and about the use of less-than-lethal weaponry itself. Although touted as an alternative to lethal force, research indicates that less-than-lethal weapons are being used in addition to lethal force, often in situations to force compliance. Concerns about police training and transparency in the use of less-than-lethal weapons have also been raised. Although it is unlikely Australian police will adopt drones for crowd control anytime soon, it cannot be ruled out. Perhaps debates about privacy, data retention and encroaching enforcement powers – such as those announced for the abruptly cancelled Operation Fortitude – should extend to UAVs and other technologies that are developing more quickly than our capacity to legislate for their use.