Pole-Dancing Quadcopters Are Pushed to Their Physical Limits 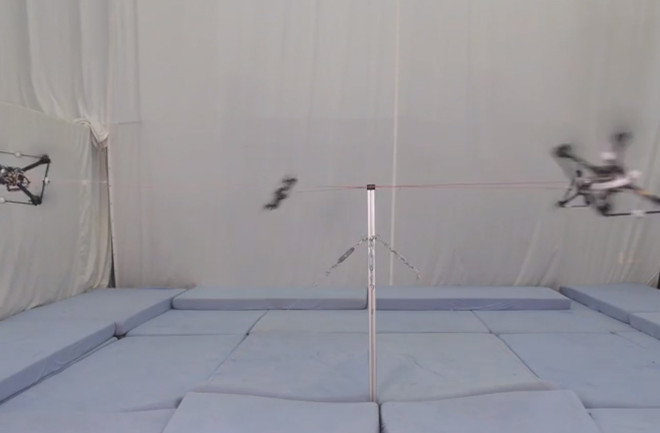 (Screengrab from YouTube) At a lab in Switzerland, scientists push quadcopters to their physical limits in a choreographed, high-speed pole dance. ETH Zurich’s Flying Machine Arena serves as a safe place for scientists to program and test novel quadcopter behaviors. Scientists there have taught quadcopters to juggle, run a slalom course and even play the piano. In this case, scientists installed a poll in the middle of the room to serve as an anchor for some serious centripetal force. Quadcopters are tethered to the pole and scientists fly them as fast as possible. The whole experiment takes on the look of a Gravitron ride as quadcopters whip around the pole at speeds exceeding 30 miles per hour, generating centripetal force 14 times the pull gravity. The test allows researchers to observe a quadcopter’s flight behavior, propeller efficiency and drag characteristics. Those measurements, in turn, can guide improved designs or capabilities, such as emergency braking.

The video above starts with a pretty standard “High-G” test to determine how much force the quadcopter can withstand, but the rest of the video showcases the hypnotizing beauty of quadcopter choreography. Indeed, the researchers themselves say their lab could certainly draw a crowd. They write:

Note that it is possible to remove the central pole by balancing the forces acting on the strings; this could be then used in performance settings, possibly enhanced by light and sound effects.

It’s a certainly a sign of the times that person can now mention “pole-dancing drones” without sounded entirely insane.