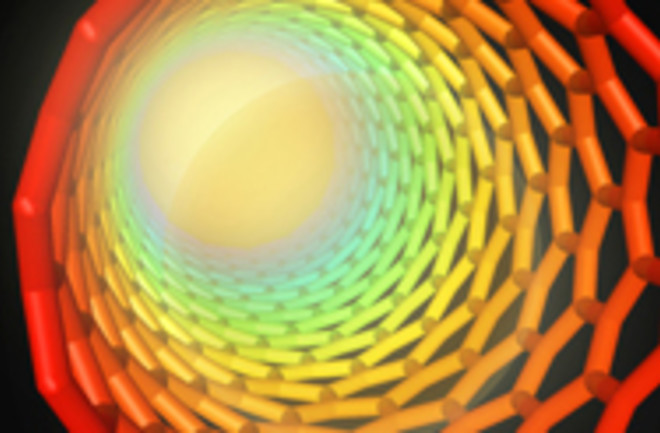 While some engineers are dragging solar energy into the big time, others are getting small: They have hit upon a novel phenomenon that creates an electric current in nanotubes, hollow microscopic structures made of carbon atoms. With further development, the effect could spawn an efficient, portable new power source.

MIT chemical engineer Michael Strano led the team that discovered how to coax electricity from the tubes. The researchers coat the nanotubes with a fuel called trinitramine and ignite it with a laser or an electric spark. As the fuel burns it creates a wave of intense heat that races down the tube, pulling electrons along with it and generating an electric current. In a prototype device, this effect—called a thermopower wave—is 100 times as powerful as a lithium-ion battery of the same weight.

Whereas conventional batteries leak energy between uses, Strano says that a thermopower battery should in principle hold its charge indefinitely. After use, recharging might be possible by adding fuel, perhaps in liquid form. Additionally, the nanotubes consist only of carbon, so a thermopower battery would not contain any toxic heavy metals.

Before such batteries can become a reality, Strano needs to find a safe, reliable way to ignite the reaction and figure out how to reduce the amount of energy that comes out as heat or light rather than electricity. “We need to capture photons and prevent heat transfer to make this technology as efficient as possible,” he says.