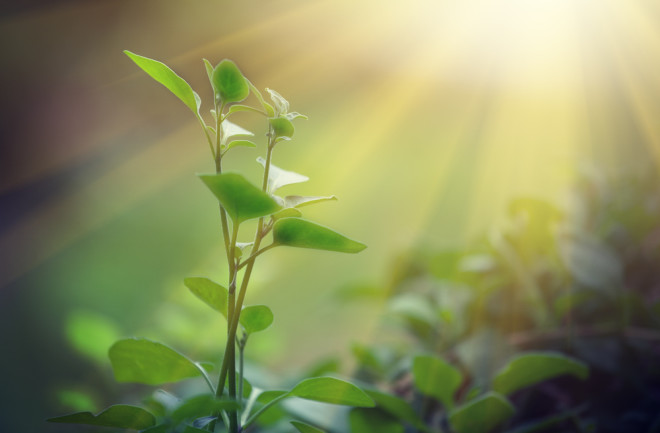 With photosynthesis, scientists show for the first time that there are quantum effects in living systems. This could lead to better solar panels, energy storage or even quantum computers. (Credit: Shutterstock) We all probably learned about photosynthesis, how plants turn sunlight into energy, in school. It might seem, therefore, that we figured out this bit of the world. But scientists are still learning new things about even the most basic stuff (see also the sun and moon), and photosynthesis is no different. In particular, according to a study released Monday in Nature Chemistry, an international team of scientists showed that molecules involved in photosynthesis display quantum mechanical behavior. Even though we’d suspected as much before, this is the first time we’ve seen quantum effects in living systems. Not only will it help us better understand plants, sunlight and everything in between, but it could also mean cool new tech in the future.

First, let’s back up. While photosynthesis may be taught in classrooms the world over, quantum mechanics is a bit less popular, in part because it’s so weird. Nobel Prize-winning quantum physicist Richard Feynman once said, "I think I can safely say that nobody understands quantum mechanics." It’s so impenetrable to non-experts that the same metaphors come up whenever someone tries to explain it. You might have heard of Schrödinger's Cat, which is both alive and dead at the same time thanks to quantum weirdness — in particular, because electrons can be in two states at the same time. It’s only when we observe the system that the weirdness collapses and reality “picks” one state: the cat’s actually alive (or dead), the electron’s actually at this end of the room (or that end). But quantum effects are typically limited to the very small, and only really observable in perfect, laboratory conditions. A living being, with its wet, messy systems, would be a tough place to find some quantum weirdness lurking — and yet we have.

Scientists zoomed in on the Fenna-Matthews-Olson (FMO) complex, a key component of green sulfur bacteria's machinery for photosynthesis. It’s been a historical favorite for such research because we’ve long known its structure and it's fairly easy to work with. Previous experiments had seemed to show light-sensitive molecules in this area in two different states at the same time — that’s quantum weirdness — but the effect lasted more than 1 picosecond, which is much longer than expected. This new study shows that it was really just regular vibrations in the molecules, nothing quantum about it. But researchers have been excited about the possibilities of quantum biology for years, so having disproved the earlier experiments, the authors wanted to find some new evidence of their own. “We wondered if we might be able to observe that Schrödinger cat situation,” says co-author Thomas la Cour Jansen in a press release. And observe it they did! With a technique called two-dimensional electronic spectroscopy, researchers saw molecules in simultaneous excited states — quantum weirdness akin to a cat being alive and dead at the same time. What’s more, the effect lasted exactly as long as theories predicted it, suggesting this evidence of quantum biology will last. As the authors succinctly put it, “Thus, our measurements provide an unambiguous experimental observation of excited-state vibronic coherence in the FMO complex.” What could be simpler? The results shed light (haha) on how to harvest energy from light, and the team thinks they’re “generally applicable” to a variety of systems, living and non-living alike. This means it could result in engineering benefits such as better solar panels, energy storage or even quantum computers. And, of course, updated textbooks for tomorrow’s lessons on photosynthesis.