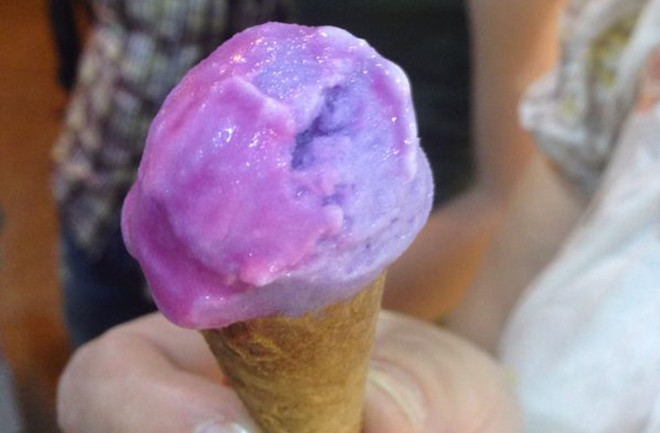 The color-changing flavor, Xamaleon. (Credit: Manual Linares, Cocinatis) Believe it or not, it is possible to make ice cream even better. Manuel Linares, a former physicist turned cook, has invented a variant on the classic treat that changes colors as you lick it. The new creamy concoction called Xamaleón — an homage to "chameleon" — transitions from periwinkle to pink when it touches the tongue, and tastes similar to “tutti-frutti,” Phys.org reports. The ice cream’s colorful trick relies on both changes in temperature and reactions to acids in the human mouth. However, Linares isn’t revealing any more details about his secret recipe. What we do know is the ice cream is made with natural ingredients like strawberries, banana, vanilla and almonds. Additionally, Linares sprays what he calls a “love elixir” on the ice cream after it’s scooped to help accelerate the reaction. We probably won’t know the whole story behind Xamaleón until Linares secures a patent for his creation, which is pending.  "As a physicist I know that there are various possibilities that might work and I was delighted when I managed to crack it and create an ice cream that changes color," Linares said. Earlier this year Linares opened an ice cream shop in Blanes, his hometown in Spain, and has plans for more exotic ice cream flavors in the future. Up next, he says: An ice cream made with Peruvian and African medicinal plants that will provide an aphrodisiac effect.