Photographing the glow of the human body

As you read this, you are glowing - weakly, faintly, but glowing nonetheless. Chemical reactions within your body, besides liberating energy and producing heat, are also emitting small numbers of photons, elementary particles of light. The glow is strongest in the late afternoon, and around the lower part of your face.

Many living creatures, including fireflies, jellyfish, squid, glow-worms and deep-sea fish, are known for producing their own light often through the help of bacterial accomplices. But virtually all living things emit some degree of light, albeit so weakly that it's very hard to detect. Our own biological glimmer is a thousand times less intense than the sensitivity of the human eye so our only hope of detecting it is with sophisticated instruments.

That's exactly what Masaki Kobayashi from the Tohoku Institute of Technology has done. Searching for our inner light is usually the province of hippies and new age followers. Kobayashi is neither - he has actually managed to photograph the dim glow of humans using an incredibly sensitive camera, able to detect the dimmest of lights.

Previous cameras took more than an hour to record a decent image but Kobayashi's camera is so sensitive that it can detect light at the level of a single photon. Even so, using it is tricky. The camera needs to be kept at -120 degrees Celsius and sealed in a completely light-tight room. The person being filmed also needs to be in complete darkness, as well as naked and very clean, lest clothing or grime obscure the photons they emit. 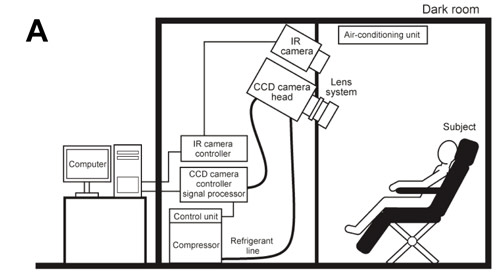 Kobayashi recruited five volunteers and allowed took photos of them every three hours between 10am and 10pm, for three days. Aside from the brief forays into pitch-blackness, they experienced normal light and dark conditions and slept between midnight and 7am.

The glow is a rhythmic one, brightening and fading over the course of the day with a peak around 4pm. Kobayashi thinks that this rhythm is driven by an internal body clock, for he managed to break the cycle and suppress the volunteers' bodily glows by keeping them awake in constant light and disrupting their sleep patterns.

The stream of 'biophotons' isn't just a reflection of body heat. An infrared camera showed that some of the hottest body parts like the side of the neck above the collarbones give off very few photons, and the total light emissions didn't match variations in body temperature in any meaningful way.

Instead, Kobayashi thinks that the glow comes from chemical reactions that produce free radicals - atoms or molecules that have a lone, isolated electron. Electrons usually dance in twos, but in free radicals, one is bereft of its partner. That makes these radicals incredibly reactive and they set off a series of energetic chemical reactions as they bump into the various fats and proteins in our cells. Our glow is produced when these reactions involve fluorophores - molecules that give off photons when they shift form a high-energy "excited state" to a low-energy "ground state".

His photos reveal that our faces are the shiniest parts of our bodies, with our mouths and cheeks glowing particularly brightly. With just five male volunteers, it's not clear if this distribution of brightness applies to all people, ethnic groups or even genders, although Kobayashi's camera certainly provides a way of finding out in the future. Nor is it clear if some particular bright sparks really do have lights shining out of their bums - the volunteers will have to be standing up for us to work that out...

For more on biophotons, see this New Scientist article.