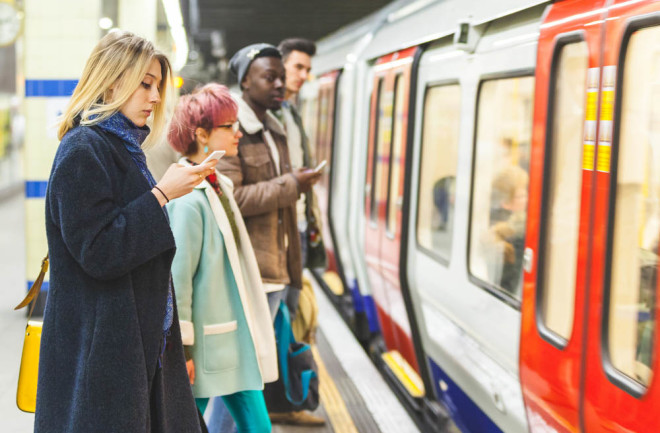 (Credit: William Perugin/shutterstock) One of the best parts of traveling is getting to see how, despite differences in culture and geography, we're all fundamentally alike. “People are the same everywhere,” Morrissey tells us — we laugh, we cry, we find cute things cute. And, it now seems, we also juggle the apps on our smartphones the same way. That's the finding of an international team of computer scientists and neuroscientists, published Wednesday in the journal Royal Society Open Science. Despite differences in total time spent on our phones and the specific programs we use, it seems people inadvertently follow a universal pattern while switching between different apps. Not only will it help developers and tech wizards create the next great viral app, but this find also provides insight into how our brains function and react to these kinds of stimuli. There’s Many Apps For That Although lots of studies have looked at overall usage levels of smartphones, and other related behaviors, the study’s authors zeroed in on what they call an “overlooked aspect of smartphone usage”: surfing between different apps. Because everyone has some things in common restricting their online habits — time and the human brain’s own limitations — the authors suspected that some overall patterns might emerge among different people. To find out, they used a “bespoke app” called Tymer to monitor the program-switching habits of 76 people over 6 weeks, though only 53 volunteers ended up providing enough data. The researchers analyzed more than 192,000 app switches, and they didn’t count interacting with the system (rather than specific apps) or any switches less than half a second apart (since those were presumably accidents). So what were the results? Interestingly, regardless of how many apps people juggled, and which individual ones they were switching between, everyone did that switching in a similar way. It turns out that everyone has clear favorites, with certain apps winning out and being used far more than the rest. It wasn't like there was a pool of many roughly equally used apps we flick through — there's a clear no. 1, no. 2, and so on. The second-most used app only gets switched to about 73 percent as much as the most used, with the third-most used app getting even less attention. Apps-olutley Fabulous The findings suggest that we approach our favorite apps via a “preferential attachment mechanism,” the authors write. So the most popular apps are still switched to even after a user starts trying out new ones, because we've become so attached to the old favorites, "either consciously through memory or subconsciously through habit.” Now app-makers have a better sense of the steep hill they’ll have to climb to get people using novel apps. (The top contenders overall are currently WhatsApp and Facebook.) It also gives a leg up to predictive tools like recommendation lists and getting likely next apps pre-loaded. And finally, the research shows switching patterns “may correlate to the psychological status of the user” as well, since previous research had already shown changes in switching patterns could be a proxy for mood. Something to think about next time you're flitting between apps on your phone, thinking about the human condition.