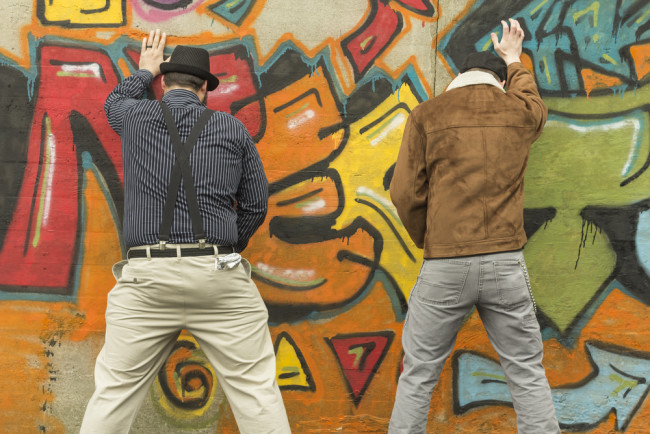 Instant karma awaits those who choose to empty their bladders on the streets of San Francisco. The San Francisco Public Works Department (SFPW) is coating select city walls with water-repelling paint that makes urine splash back onto the source of the illegal fount. It’s a technique borrowed from a city in Germany, where the specialized paint has caused enough messes that fewer people are choosing to conduct their personal business in public.

In San Francisco, far too many people are making city walls their personal restroom, and it’s been a persistent problem. Since the beginning of 2015, SFPW has received 375 requests to steam clean urine from the streets, which represents just 5 percent of the department’s 7,504 excrement cleanup requests, according to SFGate. City officials have put a dent in public urination by adding more portable toilets and sinks to troubled areas, but there’s still work to be done. That’s why they are getting creative.

The city is currently testing the specialized liquid-repellant paint on nine walls in some of the most urine-drenched parts of the city, and they plan to coat more walls in other city districts. The paint contains Ultra-Ever Dry, which is a superhydrophobic coating that's been used in self-cleaning car paints and waterproof sealants for basements (see video below). When urine hits the coated surface it all splashes back, soaking the guilty party’s feet and pants.

The tactic was quite effective when it was applied to walls in Hamburg’s St. Pauli quarter, an area where hordes of beer drinkers were habitually “breaking the seal” on the streets. The Hamburg program was just implemented a few months ago, so it's hard to quantify the reduction in public peeing. But the shocked and disgusted reactions of those who tested Hamburg's walls in this video make it clear the right people are getting the message:

Testing out a new pee repellent that "pees back" to prevent public urination. pic.twitter.com/6eDJ4w9MWH

So, at least in San Francisco, urinating in public is just as foolhardy as peeing into the wind.