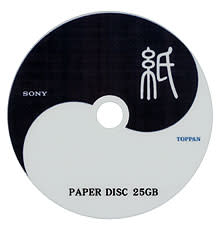 Blu-ray discs look like conventional DVDs but are 51 percent paper by weight.

Sony has a new technology you can really tear into. Their Japan-based engineers have developed video discs that are composed primarily of paper, yet can hold 25 gigabytes of information—more than five times as much as current DVDs. The pulp-based discs can be easily sliced by scissors (useful for destroying sensitive data) and should be cheaper than DVDs to manufacture, says Mack Araki, Sony’s vice president of corporate communications. “They’re also obviously more environmentally friendly,” he says. The paper discs embody a new format known as Blu-ray, which several leading electronics companies have already introduced in Japan. In contrast to current DVDs, Blu-ray discs are created and read with blue lasers rather than red ones. Sony’s paper discs would therefore require new players. Araki says the first blue-laser products should be available in the United States by the end of next year. There is no word yet on when paper discs will start spinning here, however.