Our Universe May Be a Giant Hologram

Physicist Brian Greene explains how properties at the black hole’s surface—its event horizon—suggest the unsettling theory that our world is a mere representation of another universe, a shadow of the realm where real events take place. 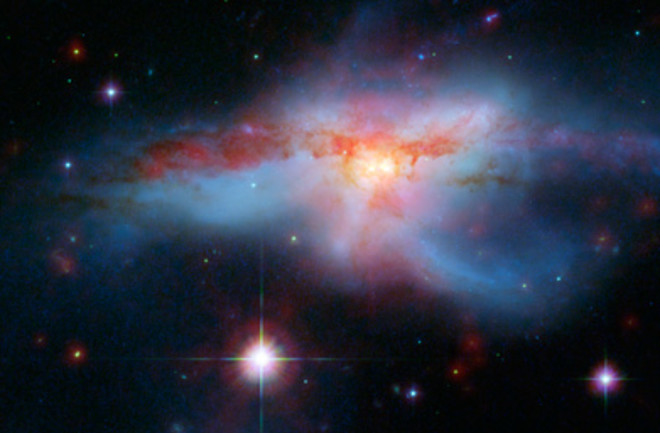 Two monster black holes may lie within the double bright area at the center of galaxy NGC 6240. NASA

If, when I was growing up, my room had been adorned with only a single mirror, my childhood daydreams might have been very different. But it had two. And each morning when I opened the closet to get my clothes, the one built into its door aligned with the one on the wall, creating a seemingly endless series of reflections of anything situated between them. It was mesmerizing. All the reflections seemed to move in unison—but that, I knew, was a mere limitation of human perception; at a young age I had learned of light’s finite speed. So in my mind’s eye, I would watch the light’s round-trip journeys. The bob of my head, the sweep of my arm silently echoed between the mirrors, each reflected image nudging the next. Sometimes I would imagine an irreverent me way down the line who refused to fall into place, disrupting the steady progression and creating a new reality that informed the ones that followed. During lulls at school, I would sometimes think about the light I had shed that morning, still endlessly bouncing between the mirrors, and I would join one of my reflected selves, entering an imaginary parallel world constructed of light and driven by fantasy.

To be sure, reflected images don’t have minds of their own. But these youthful flights of fancy, with their imagined parallel realities, resonate with an increasingly prominent theme in modern science—the possibility of worlds lying beyond the one we know.

There was a time when the word universe meant “all there is.” Everything. The whole shebang. The notion of more than one universe, more than one everything, would seemingly be a contradiction in terms. Yet a range of theoretical developments has gradually qualified the interpretation of universe. The word’s meaning now depends on context. Sometimes universe still connotes absolutely everything. Sometimes it refers only to those parts of everything that someone such as you or I could, in principle, have access to. Sometimes it’s applied to separate realms, ones that are partly or fully, temporarily or permanently, inaccessible to us; in this sense, the word relegates our universe  to membership in a large, perhaps infinitely large, collection.

With its hegemony diminished, universe has given way to other terms that capture the wider canvas on which the totality of reality may be painted. Parallel worlds or parallel universes or multiple universes or alternate universes or the metaverse, megaverse, or multiverse—they’re all synonymous, and they’re all among the words used to embrace not just our universe but a spectrum of others that may be out there.

The strangest version of all parallel universe proposals is one that emerged gradually over 30 years of theoretical studies on the quantum properties of black holes. The work culminated in the last decade, and it suggests, remarkably, that all we experience is nothing but a holographic projection of processes taking place on some distant surface that surrounds us. You can pinch yourself, and what you feel will be real, but it mirrors a parallel process taking place in a different, distant reality.

Plato likened our view of the world to that of an ancient forebear watching shadows meander across a dimly lit cave wall. He imagined our perceptions to be but a faint inkling of a far richer reality that flickers beyond reach. Two millennia later, Plato’s cave may be more than a metaphor. To turn his suggestion on its head, reality—not its mere shadow—may take place on a distant boundary surface, while everything we witness in the three common spatial dimensions is a projection of that faraway unfolding. Reality, that is, may be akin to a hologram. Or, really, a holographic movie.

The journey to this peculiar possibility combines developments deep and far-flung—insights from general relativity; from research on black holes; from thermodynamics, quantum mechanics, and, most recently, string theory. The thread linking these diverse areas is the nature of information in a quantum universe.

Physicists Jacob Bekenstein and Stephen Hawking established that, for a black hole, the information storage capacity is determined not by the volume of its interior but by the area of its surface. But when the math says that a black hole’s store of information is measured by its surface area, does that merely reflect a numerical accounting, or does it mean that the black hole’s surface is where the information is actually stored? It’s a deep issue and has been pursued for decades by some of the most renowned physicists. The answer depends on whether you view the black hole from the outside or from the inside—and from the outside, there’s good reason to believe that information is indeed stored at the event horizon. This doesn’t merely highlight a peculiar feature of black holes. Black holes don’t just tell us about how black holes store information.  Black holes inform us about information storage  in any context.

Think of any region of space, such as the room in which you’re reading. Imagine that whatever happens in the region amounts to information processing—information regarding how things are right now is transformed by the laws of physics into information regarding how they will be in a second or a minute or an hour. Since the physical processes we witness, as well as those by which we’re governed, seemingly take place within the region, it’s natural to expect that the information those processes carry is also found within the region. But for black holes, we’ve found that the link between information and surface area goes beyond mere numerical accounting; there’s a concrete sense in which information is stored on their surfaces. Physicists Leonard Susskind and Gerard ’t Hooft stressed that the lesson should be general: Since the information required to describe physical phenomena within any given region of space can be fully encoded by data on a surface that surrounds the region, then there’s reason to think that the surface is where the fundamental physical processes actually happen. Our familiar three-dimensional reality, these bold thinkers suggest, would then be likened to a holographic projection of those distant two-dimensional  physical processes.

If this line of reasoning is correct, then there are physical processes taking place on some distant surface that, much as a puppeteer pulls strings, are fully linked to the processes taking place in my fingers, arms, and brain as I type these words at my desk. Our experiences here and that distant reality there would form the most interlocked of parallel worlds. Phenomena in the two—I’ll call them Holographic Parallel Universes—would be so fully joined that their respective evolutions would be as connected as me and  my shadow.