A crab-walker made of paper and polystyrene could be used in places where humans cannot easily go. 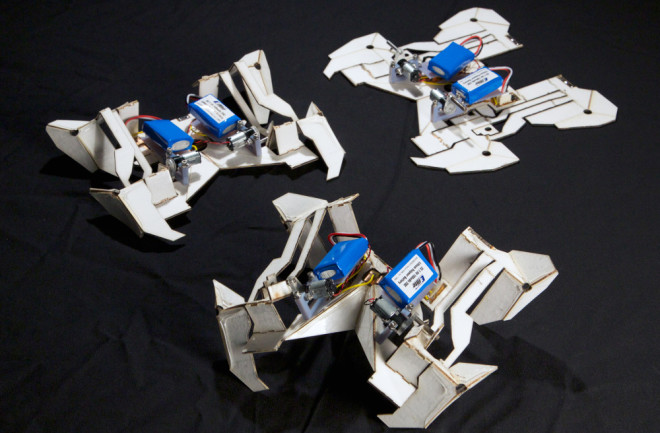 Using embedded wires to heat and shrink its initially flat body, the self-folding robot is ready to scuttle away in just minutes. (Credit: Seth Kroll/Wyss Institute)

At first glance, it looks like a child’s science fair project: a flat, plastic cutout with batteries in the middle. Then it shudders to life. A few joints bend. The midsection rises with a startling jolt. Moments later, it scuttles away.

This crab-walker — which self-assembles from about $20 worth of parts and walks without human direction — marks an advance in inexpensive and versatile robotics that could ultimately be created for pennies, stacked like a deck of cards and deployed in spaces and applications where no robot has gone before.

The robot, created by researchers at Harvard and MIT who published their work in Science in August, is made of paper and 3-D sheets of polystyrene from the children’s art toy Shrinky Dinks. Embedded wires heat and shrink the material in certain places, allowing the robot to fold like a piece of origami or unfurl like a flower petal.

Researchers envision using such robots in places where humans can’t easily go — a ream of sheets sent into space could unfold into a satellite, for example. They also could revolutionize manufacturing and allow people to design and print their own robot to do whatever they want, even play games with their cat, suggests Daniela Rus, director of the Computer Science and Artificial Intelligence Laboratory at MIT and one of the lead scientists on the project.

“This would really democratize robots,” she says.