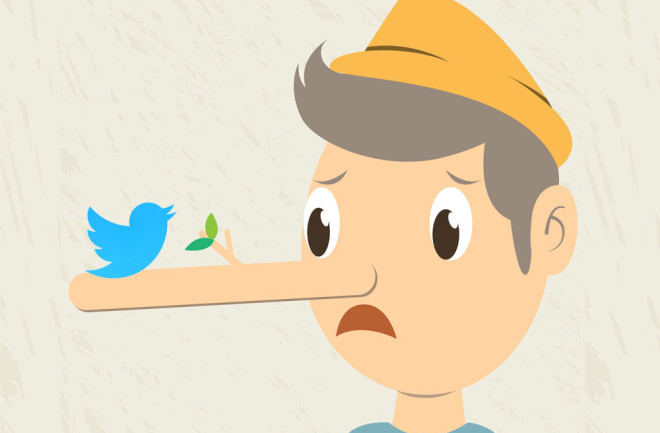 (Credit: Shutterstock) Thomas Jefferson was quite clear in his belief that an informed citizenry formed the very foundation of a functioning democracy. If that’s the case, then the hive mind of Twitter is an indication that our democratic foundation may be crumbling. It’s impossible engage in rational, productive discussions about the current state of affairs if people can’t sip from a mutual fount of objective truth—the sky is blue, the Earth is round. When we diverge from the truth, we can pay a high price. In 2013, for example, someone hacked the Associated Press Twitter account and falsely tweeted that Barack Obama had been injured in an explosion, and the Dow Jones Industrial Average shed 140 points and kicked off 4 minutes of panic on the trading floor. It was just another day on Twitter. While Twitter has certainly expedited the transfer of information, it’s also a den of lies where truth is continually overshadowed by the allure of falsehoods, according to a new study published in Science from researchers at the Massachusetts Institute of Technology. Soroush Vosoughi, Deb Roy and Sinan Arl analyzed 126,000 stories tweeted by 3 million people more than 4.5 million times between 2006 (Twitter’s inception) and 2017. They relied on six independent fact-checking organizations to verify whether a story was true or false. They found that lies spread faster, farther, deeper and more broadly than the truth—even when they factored out the influence of the bots. We only have ourselves to blame. It may come as no surprise in the era of “fake news”, but false political stories were by far the most contagious falsehoods on the social media platform, easily outpacing false news about terrorism, science, natural disasters or urban legends. Indeed, their data showed a clear increase in the number of false political rumors between 2012 and 2016, coinciding with U.S. presidential elections, of course. Falsehoods of any kind plunged deeper into the Twittersphere, were diffused more widely and reached more people than the truth. For example, it took truth six times as long as a falsehood to reach 1,500 people. Falsehoods were also 70 percent more likely to be retweeted than the truth. So what is it, exactly, that makes lies such viral content? One might intuitively think false news spreads because it’s coming from Twitter users with more followers, or from verified, influential users. But the opposite was the case. On average, those who spread false news had significantly fewer followers and weren’t as active on Twitter. The spread of false information is also driven by human behavior, as researchers accounted for the influence of bots in their analysis. Researchers offered and tested one possible explanation: People are drawn to novelty, because new, unexpected information adds to our greater understanding of the world. When extraordinary, fantastical claims are made about an event, it’s simply boring to whip out Occam’s razor. Indeed, researchers tested this claim by assessing the novelty of certain tweets, and then analyzed the sentiment of subsequent replies. Overall, they found that false rumors inspired replies expressing greater surprise, whereas true tweets inspired replies that were generally associated with sadness. Our bitter reality is just plain boring. “Although we cannot claim that novelty causes retweets or that novelty is the only reason why false news is retweeted more often, we do find that false news is more novel and that novel information is more likely to be retweeted,” the researchers wrote. The researchers hope that their work will inspire more academics to dig into the causes and consequences of the rapid distribution of false news, and perhaps discover ways to flag or contain outright falsehoods. In the meantime, you might want to close Twitter if you’re hunting for objective reflections of reality.