On the Internet, Nobody Knows You're a Rat 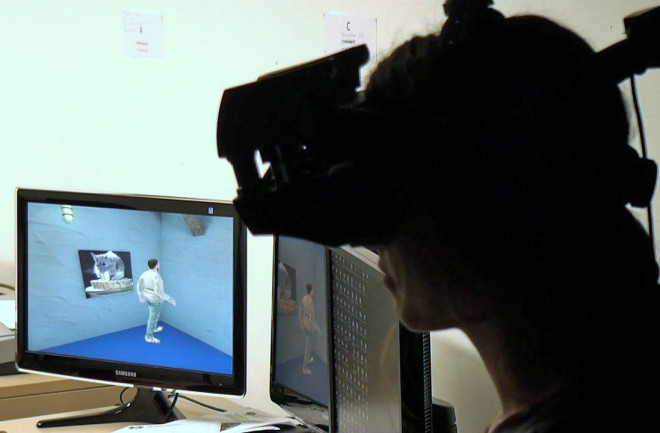 [This article originally appeared in print as "Getting the Rat's-Eye View."]

Rats are among the most studied creatures on the planet, but scientists typically observe them at a distance. Now humans can interact with rodents on equal terms, thanks to a mind-bending experiment conceived by virtual reality pioneers Mel Slater and Mandayam Srinivasan.

The experiment, described in a recent paper in the journal PLOS One, consists of two real locations plus one virtual environment: a lab in Barcelona; a 1-foot-wide arena in an animal care facility seven miles away; and a virtual version of that arena online.

In the Barcelona lab, a human participant straps on high-definition goggles to see the virtual arena through the eyes of an avatar, or digital double. When he turns, his avatar turns; he can move his double forward and back using a hand-held remote.

The participant’s movements are also transferred to a baseball-size robot in the tiny arena seven miles away. The robot, in turn, shares that space with a free-roaming laboratory rat. Cameras track the rat, and software transfers the animal’s movements to a second digital human within the virtual arena, accompanying the participant’s avatar.

“The rat’s positions and orientation are represented to the human as if it is another human,” Srinivasan explains. The rat, meanwhile, interacts with the robot in the real world.

The unusual experiment could be an opportunity for scientists to glean new insights into rat behavior, but a recent test run revealed an interesting human quirk. When participants were fooled into thinking that a human — not a rat — was controlling the other avatar, they gave it more personal space.

“We maintain our distance between people,” explains Slater. He and Srinivasan hope this technology could allow humans to interact with animals in their natural environments, giving scientists closer-than-ever insight into how they behave.