Offshore Drilling: The GOP Appeals to D.C. Tourists for Support 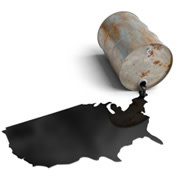 Offshore drilling has become a central issue in the campaign, despite the fact that it's pretty assured that ripping up the Outer Continental Shelf won't do jack to reduce oil prices, or decrease our dependence on foreign oil. Still, GOP members of the House of Representatives are clinging like static to the issue, to the point where they'll forgo a perfectly good August vacation to stay in D.C. and recruit tourists to their cause. According to the Christian Science Monitor:

Nearly 90 GOP lawmakers, about 40 percent of the Republican caucus, have come back to Washington since the House voted to adjourn on Aug. 1 to protest Speaker Nancy Pelosi’s refusal to allow a vote to lift a moratorium on offshore drilling. “The American people deserve more access to American oil, and Congress should be in session until we vote,” said Rep. Mike Pence (R) of Indiana, speaking to a chamber half-filled with tourists, escorted by GOP lawmakers to break off their tours of the Capitol and take a seat on the floor. He urged the tourists, many of whom seemed astonished to find themselves on the floor of the US House of Representatives, to “call to a Democratic member of Congress from your state” to demand a vote.

Funny how Pence neglected to mention that, even if a vote happens tomorrow and the moratorium is overturned, it would likely be 2013 at the earliest before our oil supply saw any increase. So you may as well enjoy that August holiday, ladies and gentlemen. Image: iStockPhoto